Big data, little help, or how to use big data in the most efficient way

Home / Fintech / Big data, little help, or how to use big data in the most efficient way

A few years ago, companies did not fully understand what to do with big data and what tasks they may solve. Today, it is used in many industries: banking, retail, healthcare, farming, etc. Big data helps optimize sales and logistics, get to know customers better and, as a result, develop the best deals for them. All this leads to improved UX and increased profitability. In such a manner, both clients and owners win.

However, big data is not a magic wand. Just having it in place is not enough. The main thing is how you work with it. This post will explain how to develop a big data strategy and show some examples of using big data. Let’s trace the experience of world firms and see how you can apply it to your business.

What is Big Data?

Where big data comes from

How to develop a big data strategy

Five use cases of big data

What is Big Data?

First of all, let’s understand what big data is. If you try to google the term, you may be rather confused. Even in scientific publications, descriptions diverge. Millions of observations may be considered common data. Yet, thousands may qualify as the big one because each piece of data has a thousand features. Therefore, it was agreed to break the data into small, medium, and large according to their volume.

Small data is a matter of gigabyte, medium – anything around a terabyte. The weight of big data is roughly a petabyte. Here is another criterion: everything that does not fit one server is big data. Small, medium, and big data have different working principles. Big data is usually stored in a cluster on several servers at once. This makes even simple steps more challenging to perform.

For example, a simple task is to find the average value. If it’s small data, we add everything up and divide it by the amount. And in big data, we cannot collect all the information from all servers at once. Instead, we send a separate program to each server. The running programs form intermediate results. Based on these results, the average value is determined.

Where big data comes from

Big data comes from various sources: social media, mobile phones, measuring devices, public places equipped with cams, etc. As a result, data collection is updated daily with images, geotags, information about searched goods, liked posts, state of health, and more. To work with big data, you need to collect, read, and store it somewhere. Also, the data should be processed and analyzed. Eventually, you will have to filter the received information and draw conclusions.

Today, only a few companies can leverage big data effectively. This is often due to the lack of a long-term strategy and clear goals. To make the most of your data, you must be clear about the target sources and intended use. Let’s see a step-by-step guide on how to use your data wisely

How to develop a big data strategy

Handling big data is like looking for a needle in a haystack. That is why it is vital to know what exactly you are searching for. According to IDC research, companies mostly use big data to understand customers and improve service. Besides, they apply it for operational optimization, risk management, financial control, and more. 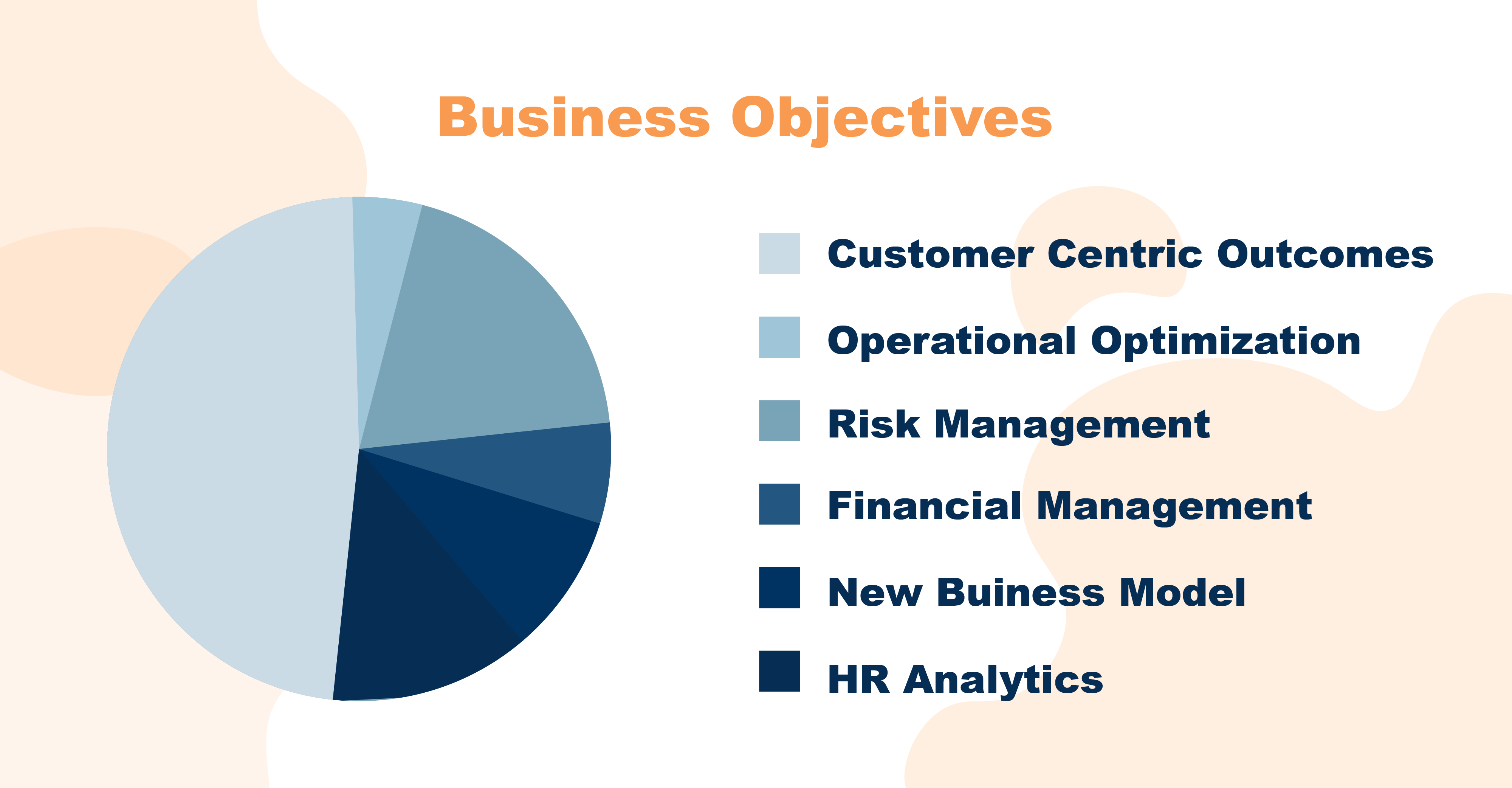 Why companies use big data

At Softensy, we have a clear pattern of building a business strategy. To set goals, we answer four essential questions:

To prepare medium and long-term plans, you need to learn the input data. Depending on the specific character of your business, you may want to study different areas. However, the typical analysis sheds light on the following:

In our example of determining store profitability – whether online or offline – you may analyze:

Detailed use cases give a full picture of how big data solutions can help achieve business goals. At Softensy, we often develop several scenarios of using big data. Next, we discuss them with the client and sort out priorities. Thus, we cover the maximum number of use cases and choose those that will bring the most significant benefit to the company.

To prioritize tasks, we use a prioritization matrix. Such a matrix facilitates dialogue between the client and the contractor. It helps choose the right use cases to launch your big data initiative. These cases combine the greatest business value and the most realistic ways for their realization. See the example of the prioritization matrix that we used in one of our projects below. 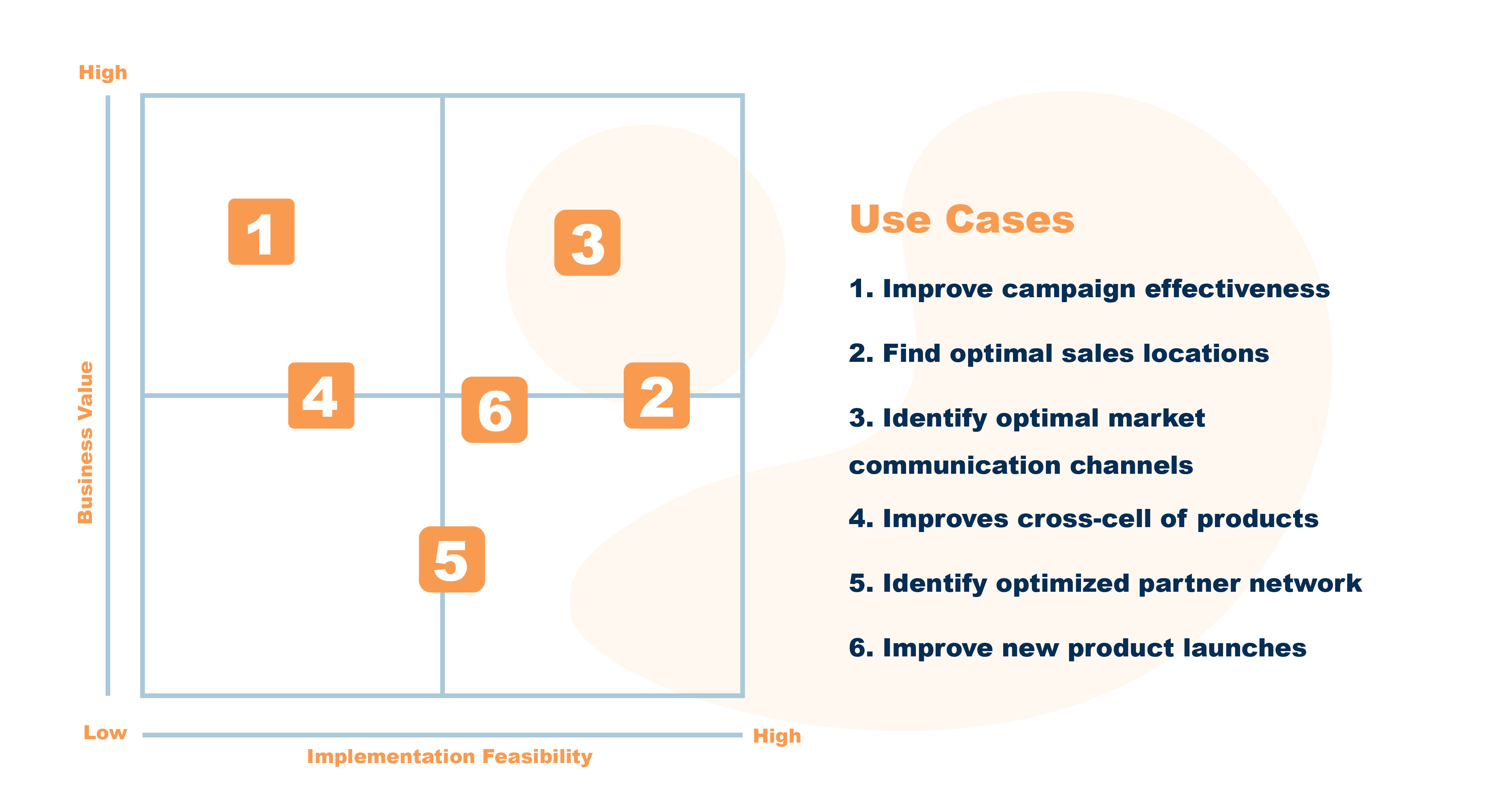 All the previous steps can be considered a preparatory phase for creating a big data roadmap. Now, based on the earlier findings, you can outline which projects you will complete first and which business goals will be achieved next month, year, or few years. Having a good understanding of the future business state, you can determine how to close the gaps in specific areas of activity: logistics, equipment, personnel, etc.

The result of this phase is a document that activates a big data strategy. It displays prioritized use cases and methods by which they will be implemented, such as: 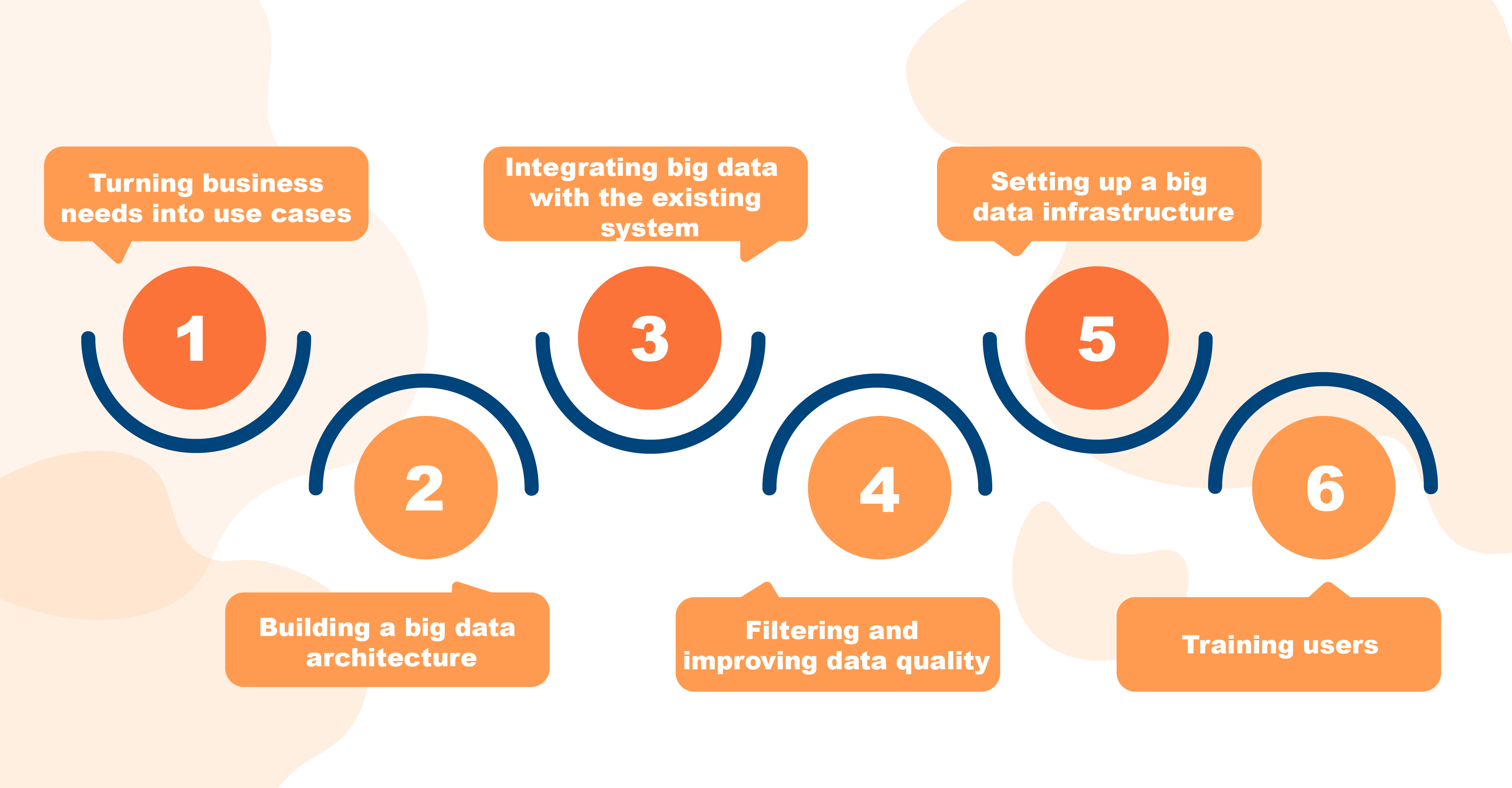 While this step has no direct relevance to the big data strategy, it promotes easy adoption of the designed plan. First of all, you should train people – users, employees, partners – to work in an innovative environment. Besides, you will need to make changes to business processes and technologies. Particular attention should be paid to personnel who will deal with the received data. Most likely, they will need some training program to adapt to changes.

Five use cases of big data

Brands have long used big data to optimize business processes and get the most out of work. Let’s trace a few success stories that show diverse fields of application in the world’s practice.

Amazon is the world’s largest e-commerce and public cloud company founded in 1994. Since that time, it has collected tons of data on what products users buy, how often they shop, and where they order goods delivery. Using this data, Amazon has launched targeted ads to make unique offers to users. It also sells access to its self-service ad portal where businesses can buy ad campaigns and apply them to different user groups, including past buyers.

Netflix is an American entertainment company that provides streaming media-based movies and series. Netflix started using big data many years ago. For example, the success of the TV show “House of Cards” by David Fincher was predicted using big data analytics. Viewers who enjoyed the UK version of the show were found to also watch the films by David Fincher. Therefore, the combination of three – a favorite show remake, a famous director, and Kevin Spacey in the lead role – appeared to be winning.

Innoplexus AG is a German organization that works in the life science field and produces products for the pharmaceutical and biotechnology industries. Its AI-based library Ontosight greatly contributes to pharmaceutical research and speeds up drug development. It is a huge repository containing unpublished Ph. D. dissertations, gene profiles, pharmaceutical patents, and much more.

Awake is a cybersecurity firm that developed an idea of setting security similar to the human brain’s principle. Like our nerves transmit information to the brain, Awake sensors pass data to the centralized hub. The sensors scan information in the cloud or on the device; afterward, the data is processed in the hub, which imitates the human brain. The deep learning technologies detect threats and recognize malicious intentions in unusual data.

One of our clients is a large Eastern European bank that contacted us with the task of increasing customer loyalty by delivering more personalized services. The goal was to organize a big data analysis and develop unique offers for each customer group. We faced the challenge of having unstructured data spread across multiple channels: website, mobile app, ATM, call center, branch. Our team had to gather and process it to get a broad picture of user behavior. For that, we used the following methods:

The final step was to apply analytical tools to pull all the data together and build typical user profiles. Based on these profiles, a marketing campaign with a differentiated approach to each client group was developed.

As a result, users got a better service, and the bank reduced account attrition by 20%.

Retail, banks, airlines, hospitals, delivery services, and many more companies use big data to improve their performance. At Softensy, we consult companies wishing to utilize the potential of big data and learn about possible pitfalls. We help develop working strategies and apply new technologies. If you want to run your business at peak efficiency, contact us. We will advise on the best solution in big data analytics.

When Internet Banking Is More Advantageous Compared To Mobile Banking

Current Digital Banking Trends. Do You Still Need a Web-Based App In 2021?