Golang vs. Python: Which is best for FinTech App?

Home / Fintech / Golang vs. Python: Which is best for FinTech App?

Today, there is a lot of debate about programming languages. If you google “Go vs. Python,” you will find dozens of articles on this topic. At Softensy, we work with both technologies but use them for different purposes. Specializing in fintech, we understand the features of financial apps and know which technique is best to apply at a particular stage of development. In this post, we share our view on the “Go vs. Python” question from the fintech’s perspective. So, if you are currently facing a choice or just interested in modern trends, read ahead.

Go vs. Python: history and intended use

Python appeared in 1991. It has a high-level data structure and dynamic semantics, which makes an excellent base for rapid program development. The support of modules and module packages facilitates modularity and code reuse.

At first, the language was mainly applied in data science. Now, it penetrated all programming areas. Many open-source projects run on Python, so starting from scratch is often unnecessary. The language is well integrated into enterprise apps and can be used in machine learning. But there are also drawbacks. For example, Python is not ideal for tasks where memory is essential. Besides, it is slow to execute and not always suitable for mobile development.

Golang was released in 2012. The purpose was to combine the high performance of compiled languages with ease of code of scripting languages. It was also to remove all the errors related to C and C++ and allow developers to quickly catch on a new language through familiar elements.

Yet, Golang is not perfect. While speed and elegance are taken to the next level, some things are far from great. For example, Go doesn’t have an extensive library and does not support inheritance. Besides, it doesn’t support object-oriented programming and has no GUI library. Yet, the language uses goroutines, a standard library, robust built-in security, and lightweight code with minimal syntax.

Let’s cut to the chase, Go is faster than Python. It was built for high-load systems and is often used in server-side scripting deployment. Unlike Python, Go compiles directly to native machine code and enables fast development cycles. It has high performance and is perfect for peak loads. Here is how Go and Python were introduced by Brad Fitzpatrick at the GoCon conference in Tokyo. 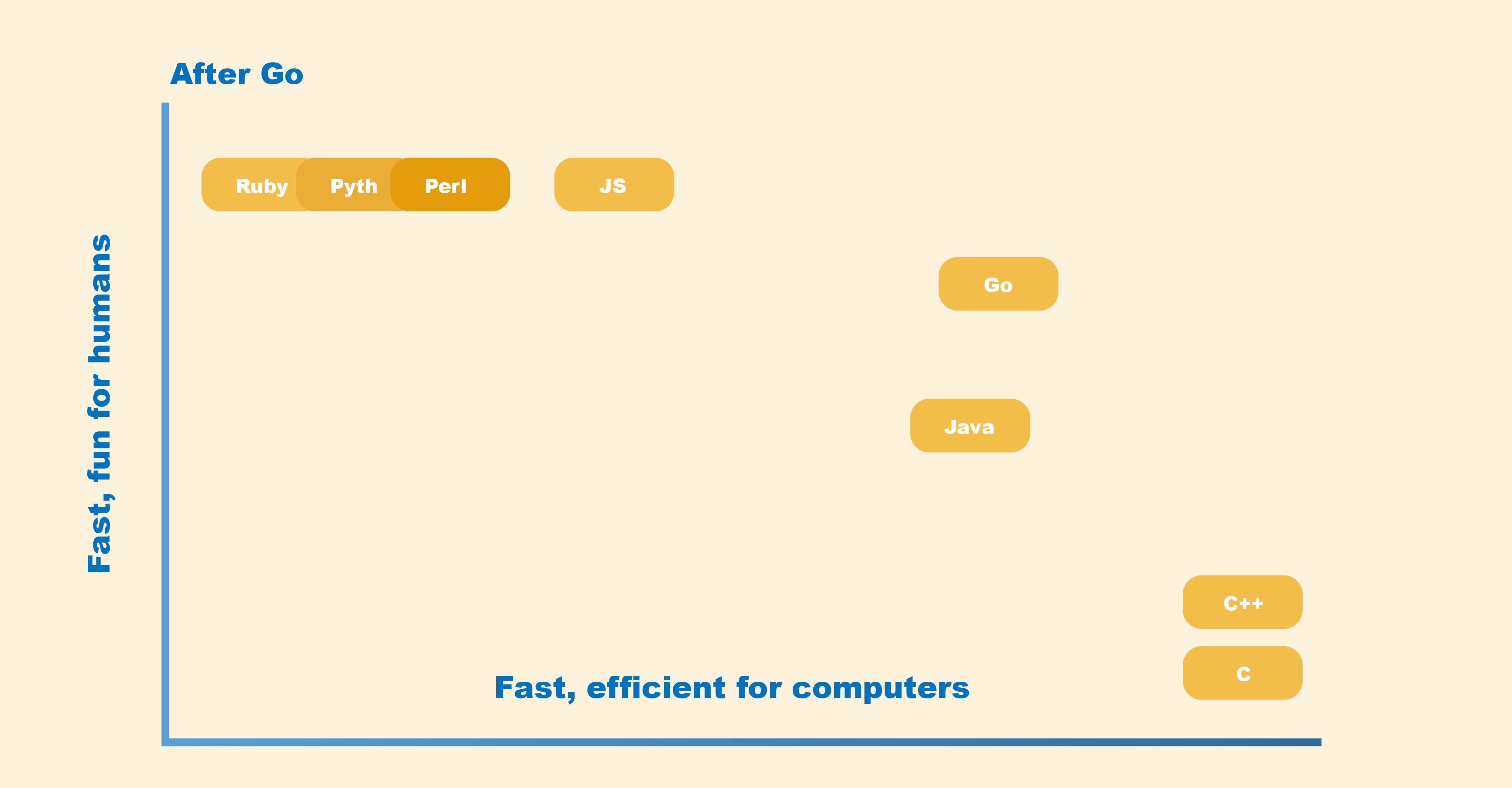 Thus, Go has a distinct advantage in runtime speed. Yet, Python may be fast enough for various tasks, especially given that many high-intensity operations of a Python-based program are performed by libraries written in C or C++. Moreover, PyPy, which is several times faster than the original CPython interpreter, can significantly speed up the work.

Go is built in such a way that you can quickly deploy its compiled apps as autonomous binaries on the platforms of your choice. At the same time, Python is a scripting language, so it needs a specific runtime. Python doesn’t have a native environment for deploying a script as an independent executable. However, there are many third-party libraries designed for this purpose. For example, you can use PyInstaller, cx_Freeze, or Nuitka. Also, container management tools like Docker simplify the process of packing a Python app with its runtime.

When we speak about scalability, we mean the ability of the language to perform many tasks simultaneously. High scalability is achieved by dividing execution into many flows.

With the built-in concurrency, Go is more scalable compared to Python. It has powerful parallelism capabilities and can process multiple requests at the same time. On the contrary, Python was not made for multi-processing. It has a broader range of usage, but it loses in terms of multitasking because of poor concurrency.

Python definitely beats Go in terms of available libraries and modules. Over the past 30 years, developers from all over the world have created many different tools that greatly facilitate and speed up the development process. Take, for example, Numpy, Tensorflow, OpenCV, and Pandas. They help with complex matrix functions, deep learning,  image processing, and data visualization. Thus, you can significantly reduce your coding time by utilizing ready-made solutions. It is worth noting that Google made useful inbuilt libraries as well. While their number is lower than Python’s, they still cover the most usable areas.

There are different opinions on Go vs. Python readability. On the one hand, Python’s code is simple and can be easily understood by other developers. On the other, Go’s fans argue there are too many ways to say the same thing in Python, which is often confusing and makes the code too long. By contrast, Go has stricter coding requirements. It doesn’t allow unnecessary libraries or unnecessary variables, so its intentions are more obvious. Considering the above, Go is less friendly to beginners. So, for developers with little experience, Python may be a better

In this section, we will look through use cases from the world-known companies. We will see in which projects a particular language was used and what determined the choice.

Zopa is a Uk-based finance company that enables lending without the participation of banks or other intermediaries. It provides a solution that allows investors to lend to people directly. While the max sum of loans can reach £25,000, each participant can give no more than one percent. Thus, the required amount is collected from many investors.

Zopa platform is written in Java, C#, and Python, which is in charge of complex algorithm models. One of the main areas of using Python is ML technologies. To create them, developers have utilized various open-source libraries: Pandas, jupyter, scikit-learn, and others. Zopa claims they are big fans of the PyData and think it is an excellent tool for prototyping their ideas.

Robinhood is a well-known exchange trading app. It allows you to buy and sell stocks without commission. The app is free; however, you can opt for a premium account to get extra features, such as margin trading or prolonged trading. Besides, the company supports cryptocurrency so that you can sell Bitcoin, Ethereum, and Dogecoin from the comfort of your home.

Robinhood is built with the help of Python and Django. The latter is a free and open framework for creating web apps written in the Python programming language. It provides all the necessary tools to help you make software faster and easier.

Stripe is one of the most popular payment services, second only to PayPal in terms of the number of serving sites. It allows you to accept payments on the website or through a mobile app in more than 100 currencies. The company partners with many big names, such as Lyft, Shopify, Xero, and Under Armour.

Stipe’s technology stack covers Ruby, Scala, and Python. Python’s capabilities enable the auto-pagination feature, which processes long lists of resources without the need to paginate results and complete the next requests manually. 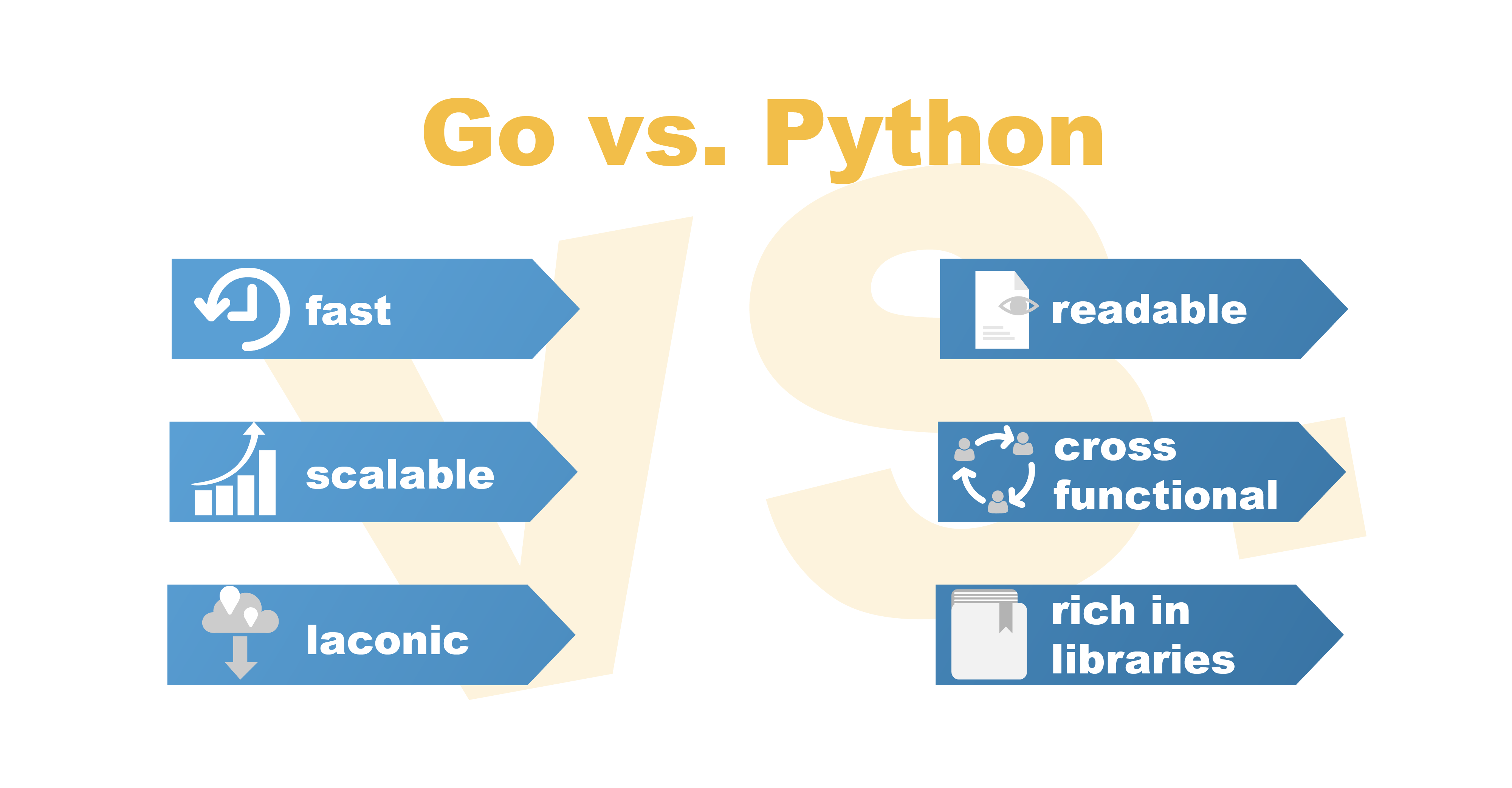 How Go and Python differ

PayPal is an international electronic payment system with over 230 million users in 190 countries. Today, it is the most common payment method worldwide. Acting as an intermediary between the seller and the buyer, it ensures the reliability of credit cards and other payment systems.

PayPal has recently migrated a significant part of its payment processing platform to Go. Mainly, they decided to rewrite its NoSQL database to have more opportunities for evolving and developing. As of now, thirty percent of the clusters use the new NoSQL database, which was initially written in C++.

American Express is a financial service corporation. It is known for its credit and debit cards and traveler’s checks for business. AmEx is considered the most expensive brand around the globe. It has a mobile app for both iOS and Android devices.

As of today, Go is the preferred language for writing high load microservices of the AmEx app. The language was tested along with three others: C++, Java, and Node.js. Although Go scored second in terms of performance, it was chosen as a base technology because of high speed, code simplicity, and handy testing framework.

Salesforce is an American company that provides a self-titled CRM-system exclusively on the SaaS model. Under the Force.com name, the company offers a PaaS platform for self-service app development, and under the Database.com brand, it provides a cloud-based database management system.

In 2017, Salesforce changed the programming language used to develop its Einstein Analytics platform. Initially chosen C-Python technology stack turned out to be not fast enough for multithreading and high loads. The follow-on Go proved to be a perfect choice for the enterprise-scale app.

At Softensy, we specialize in fintech development. Our clients are large and small businesses that develop corporate apps, CRM systems, mobile bankings, and personal finance apps. Such projects are characterized by high load, multitasking, and large data amounts. Given this, we often choose Go as the primary language for building microservices and high-load systems. For example, in the Ecobank app, we used Go to write a microservice that sends push notifications and SMS. In the CRM project, we utilized Golang to make a contact center module, i.e., chat with an operator.

Unlike Go, Python is not designed to work with intense workloads. Yet, it is more versatile and wide-ranging. Python has excellent libraries for AI and ML. That is why we opt for this language when developing chatbots and related technologies.

To sum up, both languages ​​are equally in demand but designed for different purposes. The developer’s task is to set the right technology stack, depending on the project specifics.

If you need experienced developers to make web or mobile apps, please contact us. We consult for free and describe the workflow in detail before starting the development.