How Flutter Can Help You Build Better Mobile Apps, Faster

Flutter has been making waves in the mobile development community since it was first announced in 2017. This technology allows for building high-quality mobile apps faster and easier, and it provides a great user experience like in native apps.

Flutter is well-suited for software projects of all sizes. Startups and enterprises can use it to skyrocket development, reduce time-to-market, and cut development costs. If you are looking for a way to launch a great project with less effort, learn from Softensy’s expertise in using Flutter in mobile apps.

What attracts developers to Flutter?

Flutter is a mobile app development platform created by Google. It is designed to help developers build high-quality user interfaces more quickly and easily than other options out there.

Flutter technology is also very versatile. It fits everything from simple prototypes to full-blown features and apps. And because Flutter is based on Dart, a powerful programming language created by Google, you have all the tools you need to create sophisticated graphics and powerful animations.

What attracts developers to Flutter?

According to the Stackoverflow survey, Flutter is one of the most loved technologies among cross-platform tools. 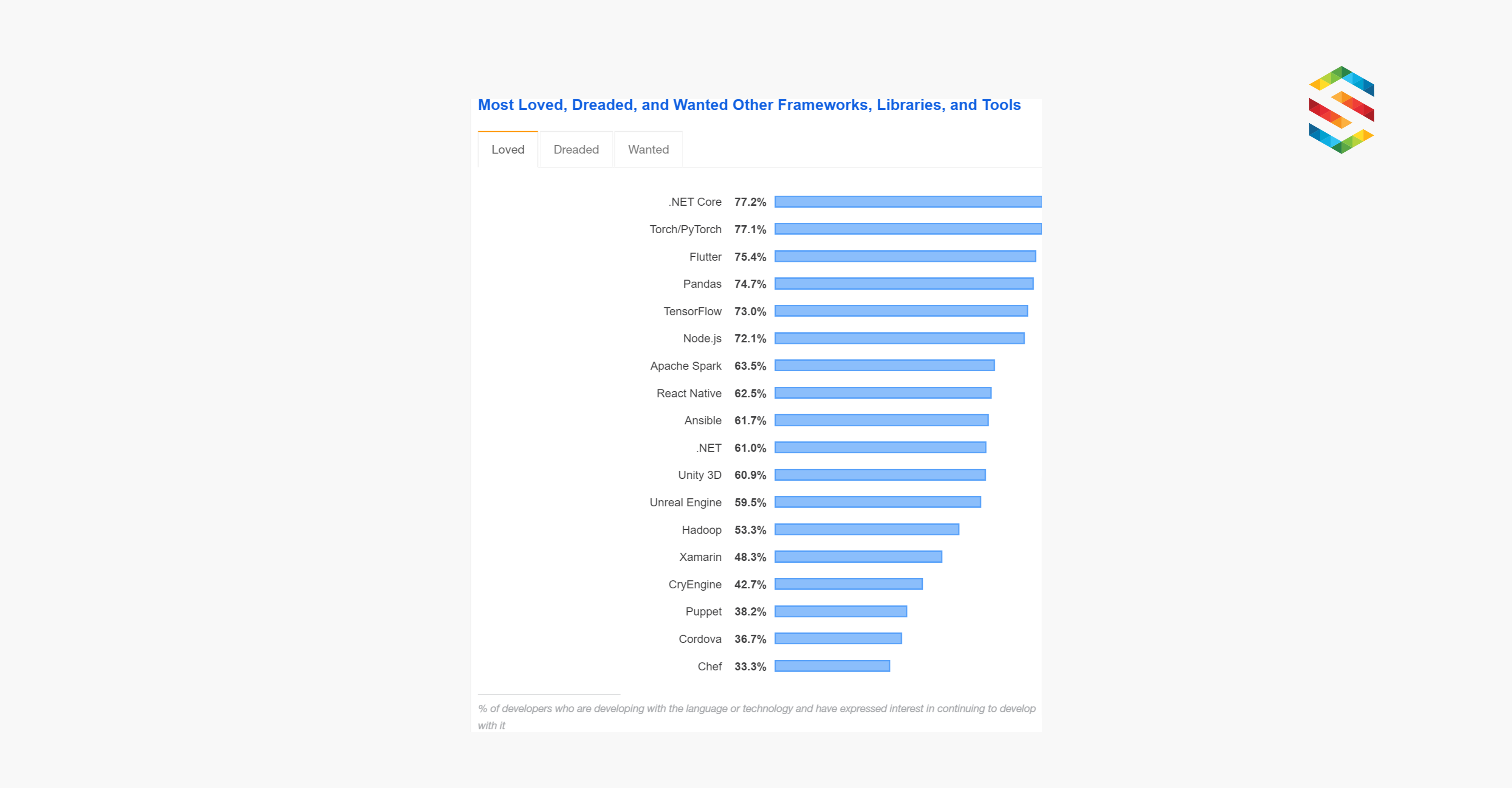 Flutter is one of the most loved technologies

Here is what makes Flutter appreciated by developers worldwide:

Open-source. This allows developers to have instant access to advanced IT tools and use them for free.

Extensive community. There is a great knowledge base consisting of documentation and thematic forums where you can find answers and solutions to any questions.

Hot reloads. This allows injecting the revised source code into a running virtual machine and immediately seeing the changes on the client side.

Native development is a ground base of quality projects, however, it’s also an expensive and long-lasting affair. Modern cross-platform tools reduce the implementation time of native apps. They allow developers to create specific app components or the whole system faster and with fewer expenses. Additionally, current cross-platform technologies are very agile and have all the power to provide a user experience similar to native apps.

Flutter is one cross-platform technology that has proven its reliability, practicality, and versatility. Here are five notable projects where it is successfully used.

The eBay team was given one year to create an app that would run on major mobile platforms. The developers knew it was hardly possible to develop two full-fledged native applications in one year, so they began to study cross-platform technologies and opted for Flutter.

Currently, 98% of eBay Motors’ code is written in Dart (Flutter). The app runs on iOS and Android and provides a seamless experience for selling and buying cars and accessories online. 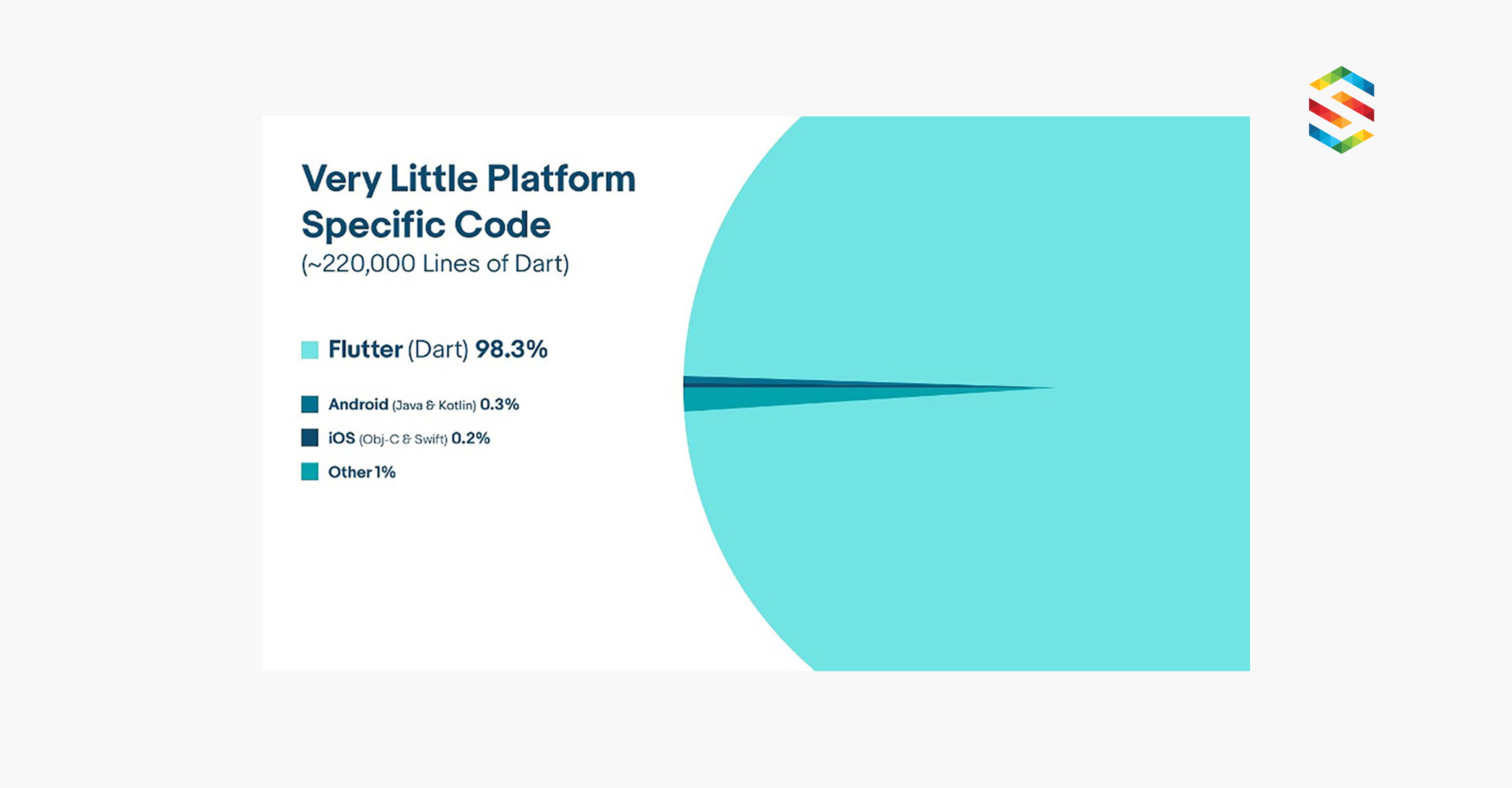 The app was firstly written in React Native for the iOS platform. When the time to develop the Android version came, the team ran into some problems that forced them to look for alternative development solutions. After researching available technologies, the Reflectly development team decided on Flutter and completely rewrote the app using Dart and Flutter tools.

The BMW development team chose Flutter because they wanted to quickly bridge the gap between a full-fledged iOS app and a less functional Android version. Having studied the Flutter possibilities, the developers concluded this technology would help them achieve desired business effect in the shortest possible time. Also, it would provide software engineers with smooth development experience and ample scalability opportunities compared to other tools.

The BMW team launched a mobile platform for drivers and dealers in less than a year. The drivers used the app to connect with the vehicles, and the dealers used it to stay in touch with the BMW brand.

The app had 3 million active users in 190 countries, and the customer base continued to grow. To keep pace with increasing user expectations, CrowdSource needed a technology that would allow reinforcement of app functionality without an extreme stretch of the development staff.

The CrowdSource team had already had a positive experience with Flutter when developing the Smart Camera feature. So, they decided to run the entire app on Flutter and were impressed with the great results.

The company got 96% of users instead of the planned 73%. Also, it cut the size of the codebase in half and increased the development speed by 100%. 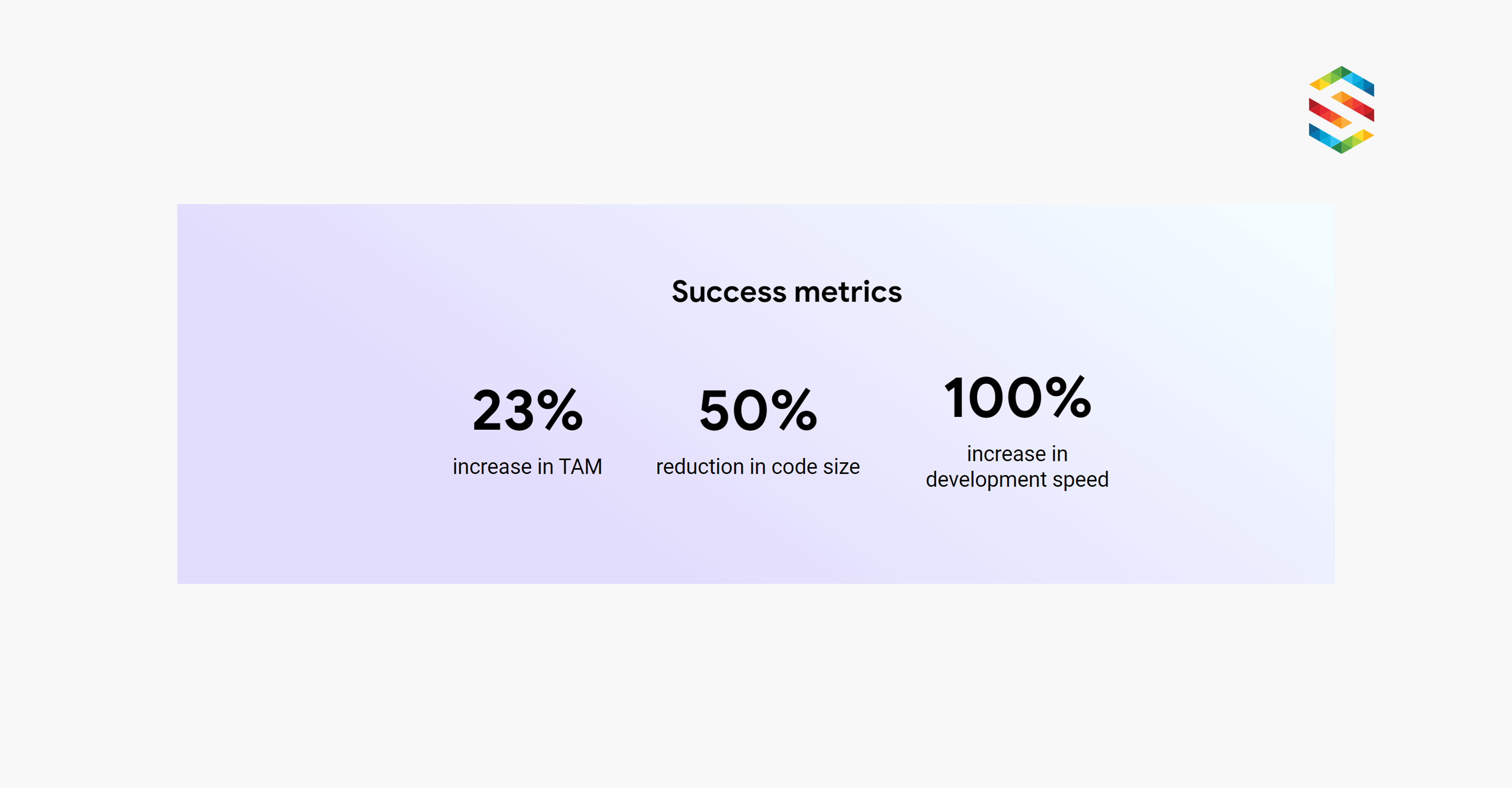 One day, the game with more than 450 million downloads began to lose popularity and gain new users. This prompted the development team to look for ways to update the user experience and rewrite the app for each platform it ran on.

The choice fell on Flutter because the technology allowed using a single code base and troubleshooting problems using a cross-platform approach. Also, it provided all the needed tools to develop apps that would run perfectly in an offline mode.

After releasing the new app version, 4 Pics 1 Word owners stabilized the user growth rates and noted the stable and uninterrupted operation of the game.

At Softensy, we develop enterprise-level projects and apps for startups. We have strong expertise in FinTech, FoodTech, EdTech, real estate development, communication technologies, and AI/ML solutions. Our team works on projects that last for years and those that take no more than a few months.

In our work, we always take the client side and propose a solution that best meets the business needs. Flutter is one such solution. We have recently used it in one of our most significant projects – mobile banking Ecobank.

Here is how Flutter helped us speed up time-to-market and reduce development costs.

We had to ensure SWIFT transfers ran like clockwork before releasing them in production. Flutter was a perfect technology for fast prototyping, so we used it to implement the first SWIFT version and engaged Beta testers in the initial check. When all shortcomings were detected and all issues fixed, we rewrote the functionality using native technologies and switched SWIFT transfers for end users of the mobile banking app. 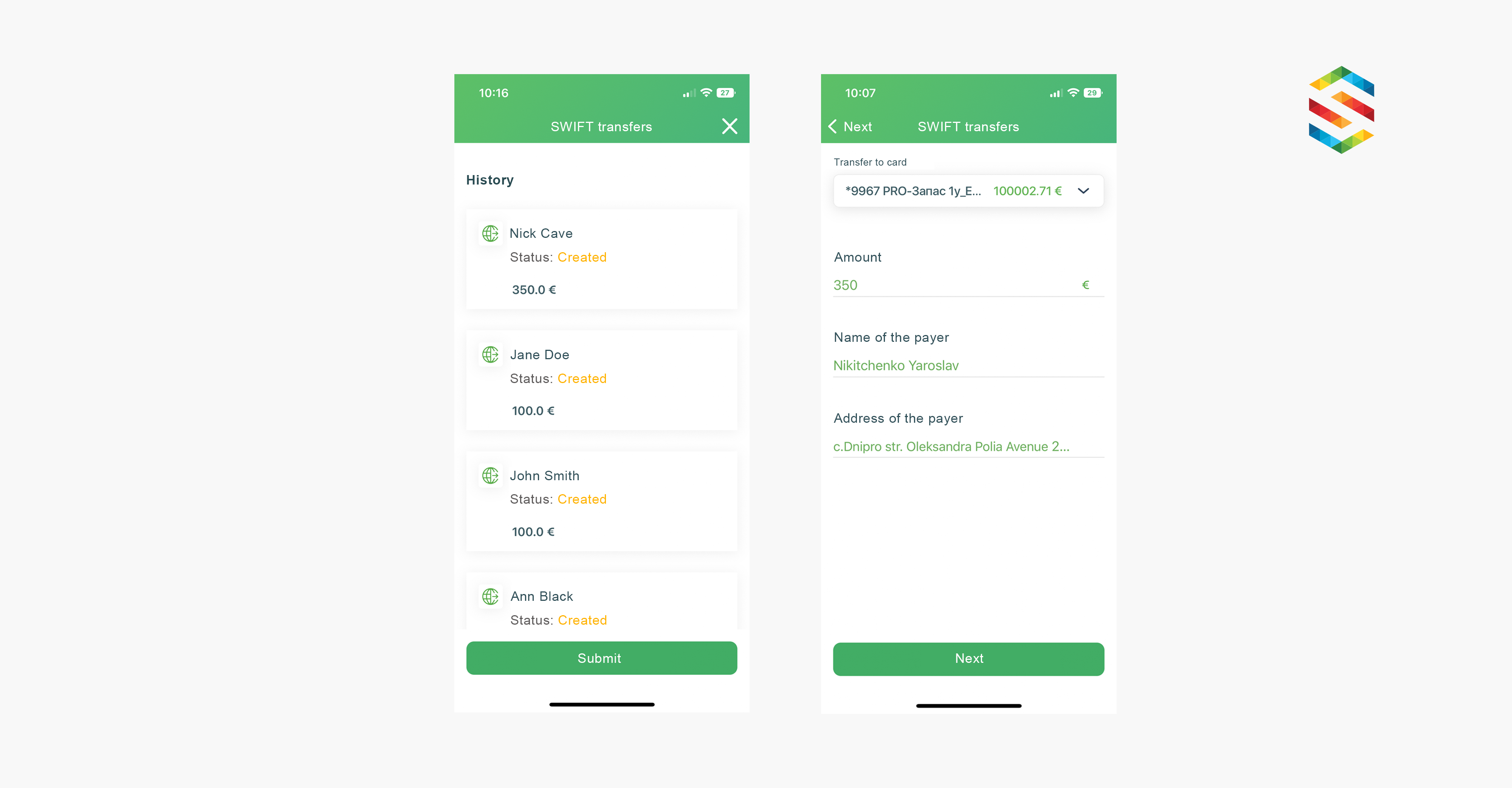 SWIFT transfers in the mobile banking app by Softensy

Simplified the creation of payment templates

We combined Flutter and native technologies to speed up the development of the payment templates. Flutter-based functionality allowed the user to choose the recipient from the drop-down list. Next, the user was taken to a native screen to verify payment details. Finally, Flutter transferred the payment details to the native screen, so that the user did not need to enter them manually. 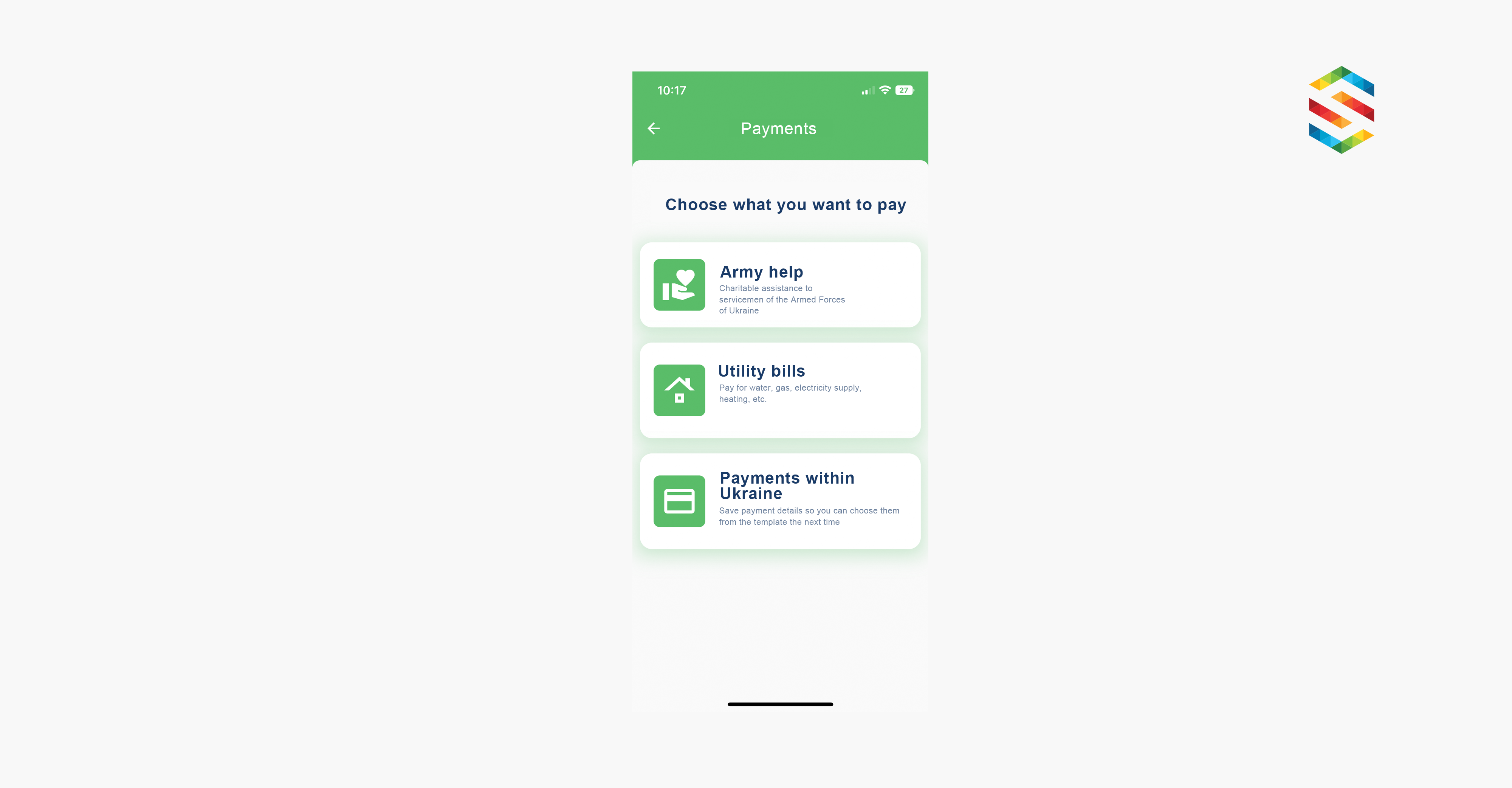 Payment templates in the mobile banking app by Softensy

During the sprint planning, our team was tasked to implement the deposit opening feature. To meet the two weeks deadline, the Swift/Kotlin and Flutter teams were working simultaneously. The former implemented the deposit opening mechanism, and the latter created a module for adding an electronic signature on documents. 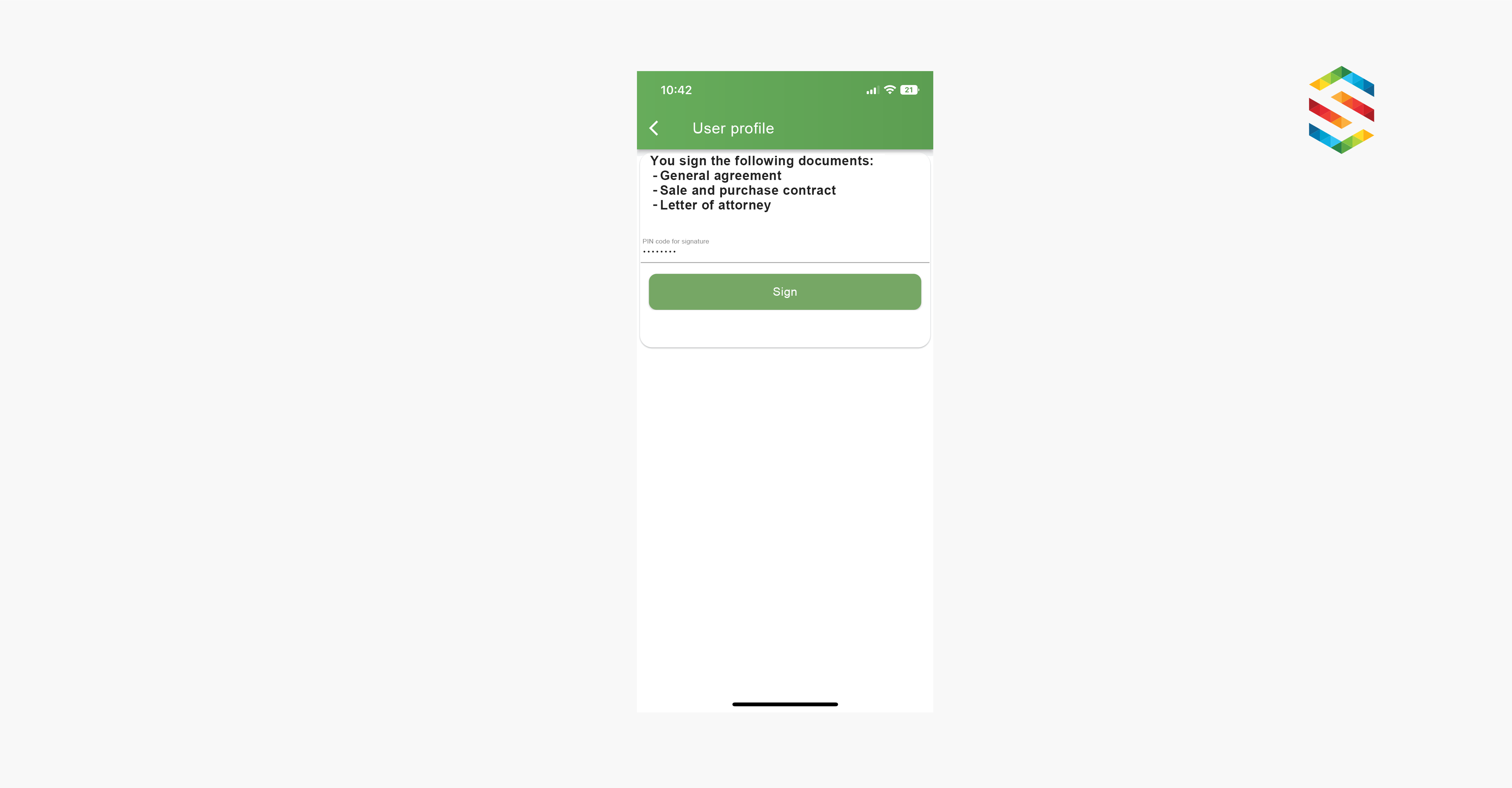 Adding electronic signature in the mobile banking app by Softensy

We used Flutter to create dynamic content on the What’s New app screen. The bank’s marketing team highly appreciated our work because such a feature allowed them to send promotions, surveys, and other notifications to users without updating the app version.

Dynamic notifications in the mobile banking app by Softensy

Flutter is an open-source mobile development SDK that helps you build high-quality user interfaces quickly and easily. With Flutter, you can create beautiful, responsive apps for iOS and Android with a single codebase. Also, according to Softensy developers, Flutter allows you to cut development time in half or more, so you can release new features and get customer feedback faster.

If you are looking for ways to run software development quickly and cost-effectively, contact us, and we will help you select the technologies that best meet your project needs.