How Organizations Use Voice Biometrics for Authentication and Fraud Prevention

The growth of technology has two sides to the coin. Not only does it improve the quality of our lives, but it also leads to more sophisticated methods of fraud. While cashless payments are replacing paper bills, the fraudsters learn to access credit cards rather than pull wallets out of purses. The most common way to reach someone else’s account is to impersonate the owner. The study says there is a new victim of identity theft every two seconds, and 1 in 15 people, on average, faces identity fraud.

Such numbers add headaches to financial institutions and make them look for new ways to protect data. One of the most reliable methods today is biometric authentication. It can be carried out by fingerprint, retina, face, and voice. The latter option is the topic of this post. Let’s consider in what cases it is used and how it helps prevent fraud.

Here are the points we are going to cover

What is voice biometrics?

Why use voice biometrics?

Ways to get voice samples

What companies use voice authentication?

Do you want to enhance security with voice biometrics?

What is voice biometrics?

Voice biometrics is a technology that establishes a person’s identity by their unique vocal characteristics, such as pronunciation, accents, emphasis, speed of speech, etc. The voice recognition process consists of two stages. First, you need to get the user’s voiceprint and convert it into a readable form. Next, compare the voiceprints using a trained neural network.

To implement the above, developers divide the resulting voiceprint into frames. After that, they clear them of external effects and noise. The cleaned voice frames are then added to the database for subsequent comparison.

Voice biometrics should not be confused with speech recognition. The first is used to detect who is talking, while the second focuses on speech meaning. Speech recognition may be more familiar to the average user because many use the voice search on Google or talk to voice assistants, like Siri or Alexa. Voice biometrics has a somewhat narrower range of use. Today, it is often employed by banks to verify their clients.

Why use voice biometrics?

Modern financial institutions use all possible ways to protect clients’ data, and the adoption of voice biometrics shows good results. A recent report suggests the technology market will reach $13bn by 2026, with a compound annual growth rate of 17%. This proves that more and more companies turn to voice detection. Let’s see why they do so and what benefits they get.

When a customer contacts the bank by phone, they are asked to verify identity by answering standard questions such as the mother’s maiden name or the first pet’s name. This method is too unreliable because such data is simple to trace. It’s as easy as winking for an attacker to go to Facebook and find your next of kin among your friends.

With voice recognition, things are much better. The voice cannot be stolen or faked, and it is always with you. This method is a real catch for call center operators because they get rid of the responsibility to decide whether the person is the bank client or swindler. If the system confirms the match, the operator can be sure they are who they claim to be.

Have you faced a problem when your wallet is full of plastic discount cards from different stores? When you shop, you have to spend time looking for a particular card, which is very inconvenient. This situation is very much like memorizing many passwords and secret words. Each service advises you to choose a unique password, so every time, it becomes more challenging to keep them in your head. Voice biometrics brings a whole new UX in this matter. It frees the user from annoying procedures and dramatically saves time when you need to access financial data.

Voice biometrics expands communication lines and lets you go beyond call centers with IVR, social, and mobile experience. You can move all interaction channels into a single contact field, allowing users to reach the bank at any time in a handy way. Such an omnichannel experience brings benefits to both clients and owners. The former can quickly solve their problems, and the latter – boost service quality, which means the level of customer satisfaction and potential profit.

Voice biometrics is a very flexible technology. You can deploy it on-premises or in the cloud. So, no matter how big your business is, you will get a reliable authorization method that protects you and your customers.

Moreover, voice biometrics does not care what language the user speaks. It identifies a person solely by voice, not by the manner of speaking or accent. Such a feature blurs the geographic boundaries of your business. You can work anywhere and be sure of data security.

With voice biometrics, you can reduce the number of steps to authenticate a user. The request processing time gets shorter, and the employees’ KPI bigger. In such a manner, you cut the overhead charges on handling clients’ calls and grow the number of happy customers. Also, voice biometrics recognizes fraudsters who tried to commit theft early. Therefore, you also save on fraud prevention. 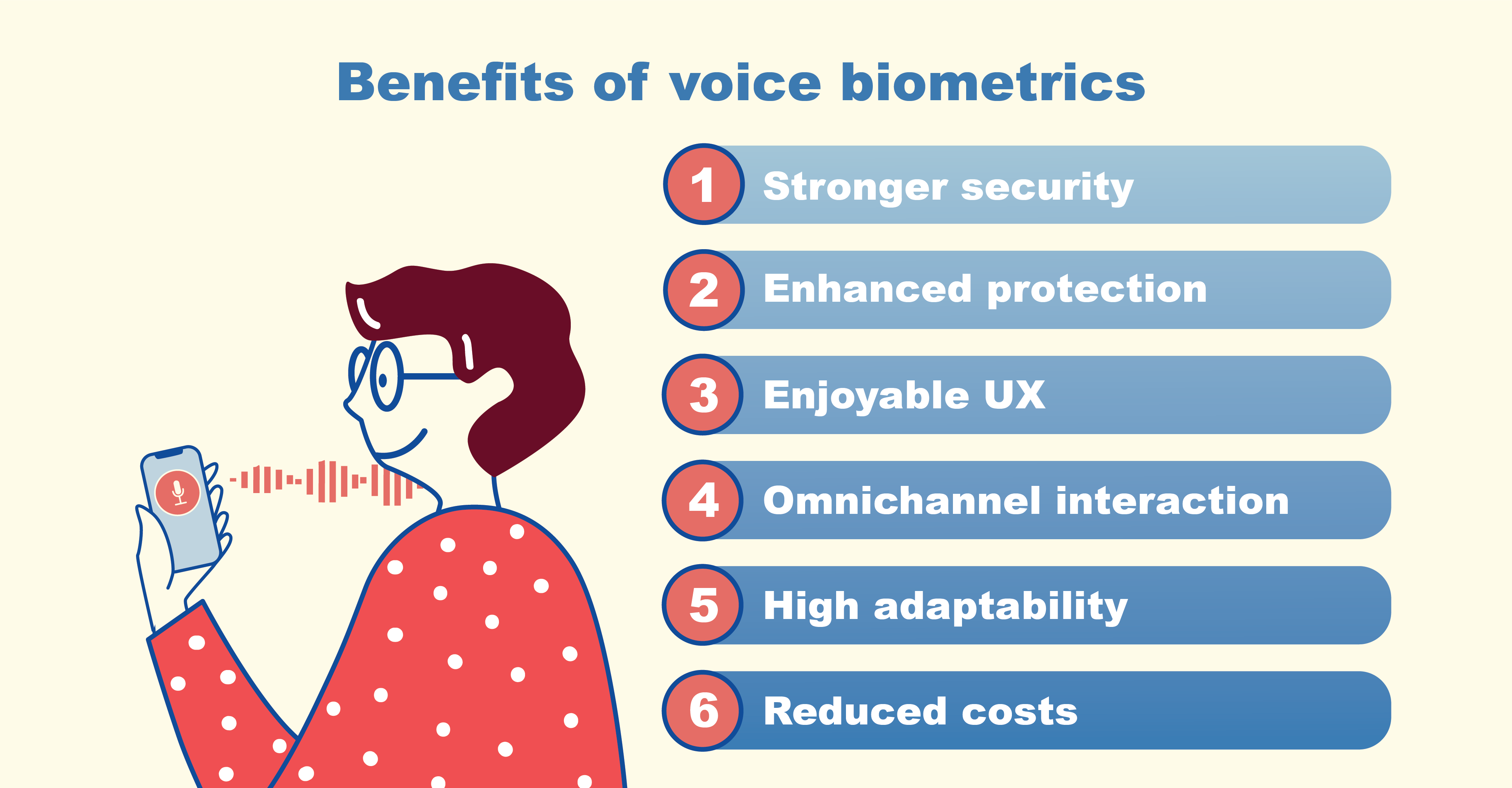 To implement voice authorization, you need to understand two things:

Let’s take a closer look at both points.

To start the authorization process, you need to get a sample of your client’s voice. The critical point is to have it clean – without unwanted impurities and interference, mainly other users’ sounds and background noise.

The most common way to get a voice sample is through a phone – mobile, landline, or VoIP. There are various techniques to record voice, and the client may not even know about it. If you use IVR technology, it can capture a sample of the customer’s speech and then pass it on for biometric analysis.

Laptops, tablets, and smartphones are no less typical devices for obtaining voice samples. The vast majority of them are equipped with microphones, so it’s easy to implement voice recording in a web or mobile app.

Ways to get voice samples

There are two main ways to obtain voice samples: active and passive. The content will change depending on which method you choose. Let’s take a closer look at this.

The active method means the user is aware of voice authorization and actively participates in the process. Typically, the user needs to provide a specific voice password to log into the system. This password can be a static phrase or random PIN.

Static phrase. Usually, it is a text phrase like “my voice is my password” or a digit combination – often the user’s phone number. Such a way is easy to implement, but it has security gaps. A static password can be overheard and recorded. A fraudster can then use the record for authorization.

Random PIN. In this case, the user will be asked to repeat a randomly generated PIN, which often consists of five or six numbers. This PIN is never repeated, and the user does not need to remember anything. Thus, you provide better security and a better user experience.

The passive method means the user passes voice authentication without knowing about it. Simply put, the system authorizes a person by whatever they say without asking to repeat a specific phrase. Of course, the main advantage here is a frictionless user experience. Imagine a situation when a disgruntled customer calls you. The last thing they want to do is repeat the phrase or numbers you dictate.

The downside of the passive method is the complexity of the implementation. To record a voiceprint, you will need to analyze all the voice’s phonemes, preferably more than once. It will take at least 30 seconds to cover the entire vocal spectrum of a person. During this time, you would want to get a “useful” speech, which involves ongoing talk, but not one-time words like yes or no. 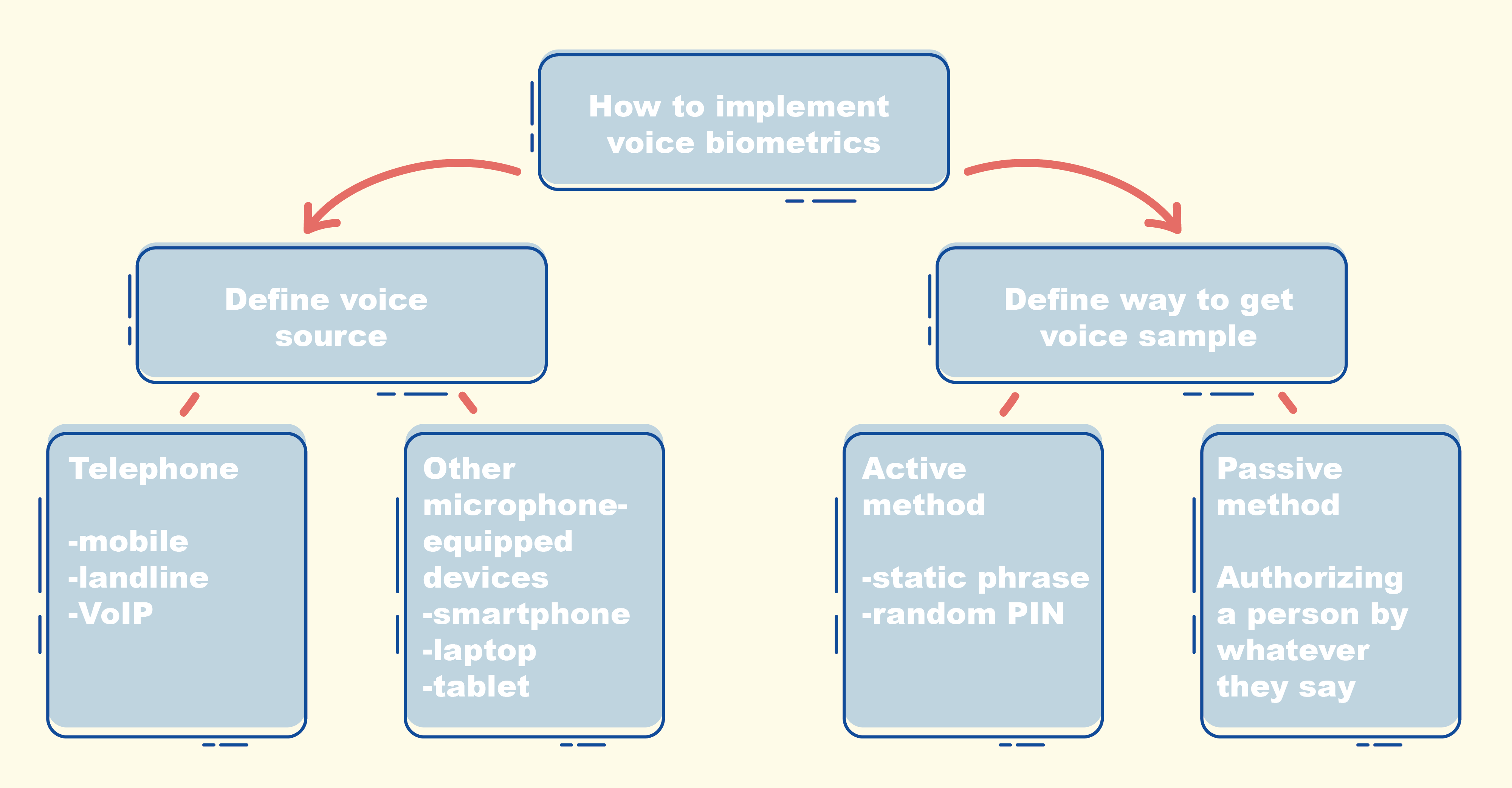 What companies use voice authentication?

As financial companies handle customers’ money, they are interested in tech to keep users safe and support the brand’s reputation. Today’s banks have gone far beyond traditional roles. They keep pace with innovation and transform into high-tech hubs that are accessible far beyond the brick-and-mortars. Given this, voice biometrics becomes more and more popular. Except for robust security, it contributes to establishing smooth UX and the growth of happy clients.

Notable names in voice banking are HSBC, Wells Fargo, Charles Schwab, Chase, Lloyds Bank, Halifax. They let users enter their account through voice, so there is no need to memorize long passwords and secret words. Wells Fargo has taken it a step further and combined voice technology with face scanning. They not only analyze the user’s voice but also watch their lips move while speaking. Thus, they prevent hacking attempts with recorded audio. 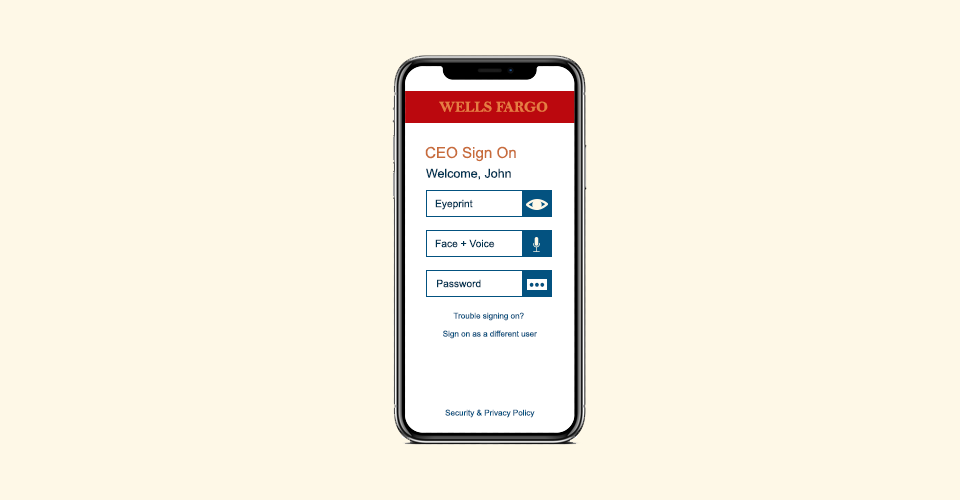 Do you want to enhance security with voice biometrics?

Voice biometrics is a powerful antifraud tool. It gives almost 100% guarantee of correct identification and reduces the time spent on processing client requests. Voice biometrics can boost business and bring your clients an upgraded experience. So, if you think to implement it, you are on the right track. At Softensy, we specialize in fintech and related solutions. If you are in doubt about particular moves, contact us for consultation. Our experts will assess the business, advise on the latest technologies, and calculate the implementation cost.

An Ultimate Guide To Chatbot Development: From Implementation To Monetization

Case Study: How We Created Smart Widget For Bank Website

Where To Start Business Processes Automation: Beginner Guide For Your Business