How to expand your business with smart TV app opportunities

A large part of the modern TV audience watches TV in a smart way. eMarketer says 37% of households in the USA own a smart TV and Statista claims the number of smart TV users will reach 119 billion by 2022. These numbers speak for the growing interest in a large screen. And as you know, demand creates supply.

Today, smart TV is something more than television in the usual sense. It allows you to surf the Internet, play games, interact in social media, make video calls, and more. In fact, a TV can perform the same functions as a smartphone only on a bigger screen.

What is Smart TV

What is Smart TV

Some time ago, mobile phones were simple communication devices with the main function of making and receiving calls. Now, they turned into multimedia gadgets with a variety of features that crowd out the primary use. The same happens with TV sets. Almost all major manufacturers have implemented Smart TV, which significantly expands the TV’s functionality, transforming it from a video broadcasting device into a full-fledged entertainment center.

So what exactly is Smart TV? In a nutshell, it is a technology that enables using the Internet and interactive services, like games and apps, through the TV set. It is activated through many systems and devices, such as TVs, digital TV receivers, Blu-ray players, game consoles, etc. These devices allow users to search for media content on the Internet, local cable TV channels, satellite TV channels, or data stored on the hard drive.

Smart TV works based on the operating system. At present, there are many OS platforms that open ample opportunities for app developers. Some of them are:

Of course, smart TV is primarily associated with movie fans. Yet, unlike traditional television, it is not limited to broadcasting TV programs. Smart TV opens up new business opportunities by bringing the user experience to the widescreen. Let’s see in what areas enterprises can apply it and how they benefit from using it.

If you sell products online, you can consider TV as one more sales channel. Launching a specially adapted app, you improve UX and allow users to see all the product details, which is not always possible on a tiny phone screen. As for online payment, it is easy to integrate it just like you do it on desktop or mobile apps. For example, Paymentwall offers a fully customizable and secure payment solution with flexible billing options. Thus, shoppers can quickly pay for goods from their TV screens by entering payment information with the remote control. 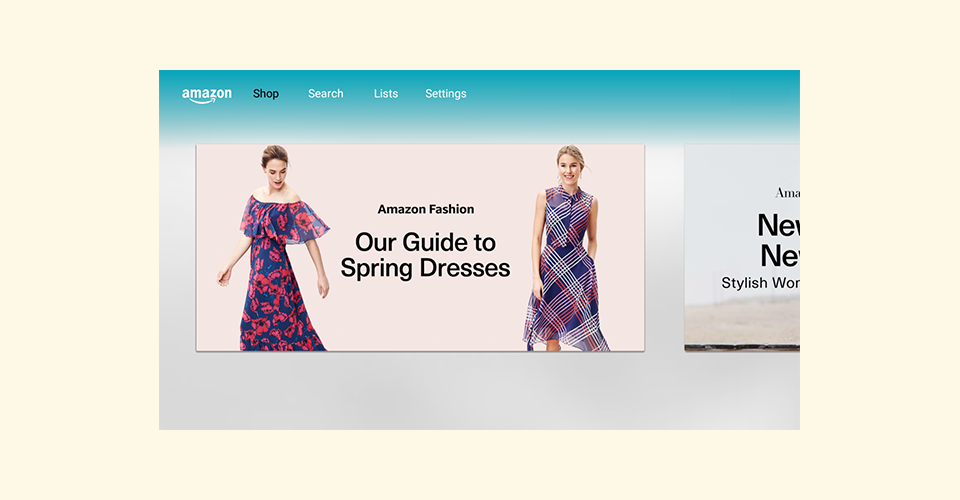 Online education has been on demand for quite a while. With the COVID19 pandemic, it gained even more followers. Well-organized programs help users receive a quality education from the comfort of their homes. Such courses mainly consist of video lessons in which the speaker explains and demonstrates the learning materials, so the large screen perfectly serves the purpose. The student can sit on a cozy couch and feel like being at the college lecture. He or she can pause the video, take a break, and rewatch it using the remote control. 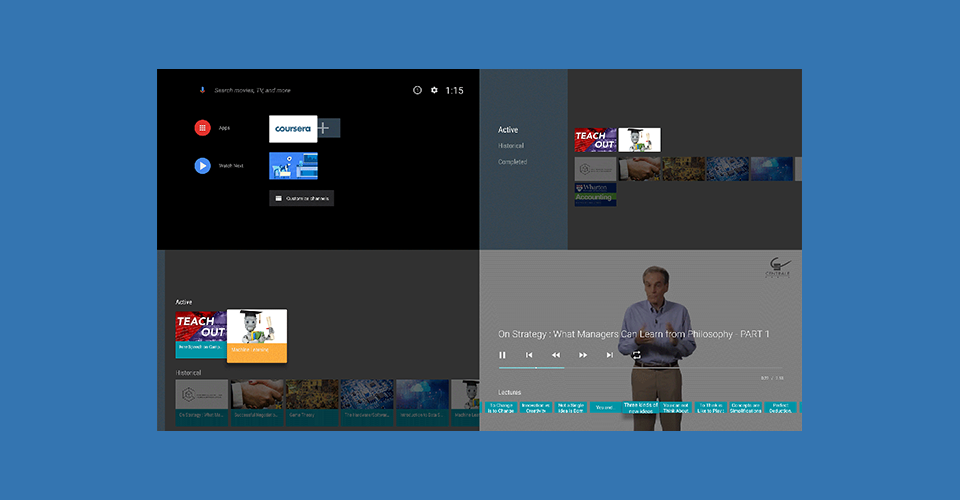 It is much easier to conduct business meetings when a conference room is equipped with a large screen. Employees do not need to crowd around the phone to hear the speaker or see what they are showing. A large image creates the presence effect and enhances communication efficiency. Thus, colleagues can fully concentrate on working moments rather than on the device that handles the video call. 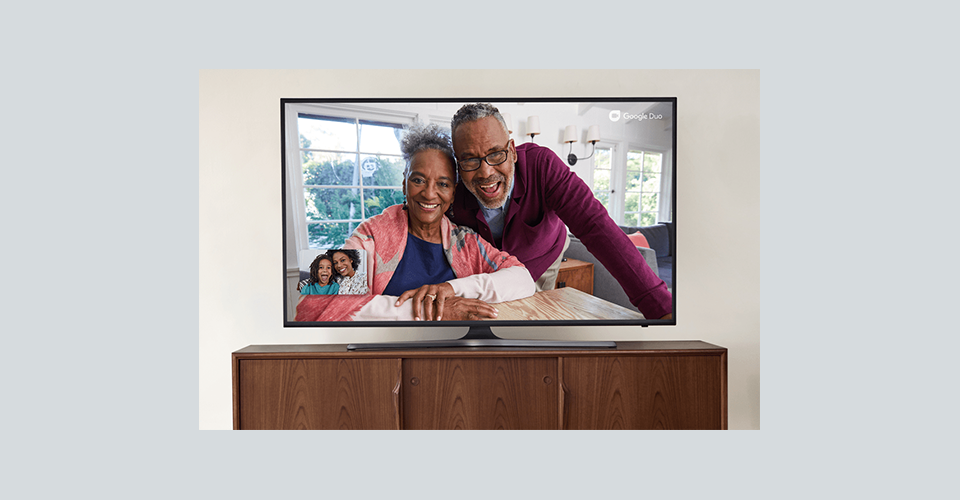 Screen mirroring is a method of transferring an image from a small screen of a mobile device (smartphone, tablet, etc.) to a large TV screen. This refers to wireless transmission through a special protocol such as Apple AirPlay or Google Cast. Screen mirroring apps are a real catch for enterprises as they make it easy to share presentations and other visuals with a single tap of the screen. 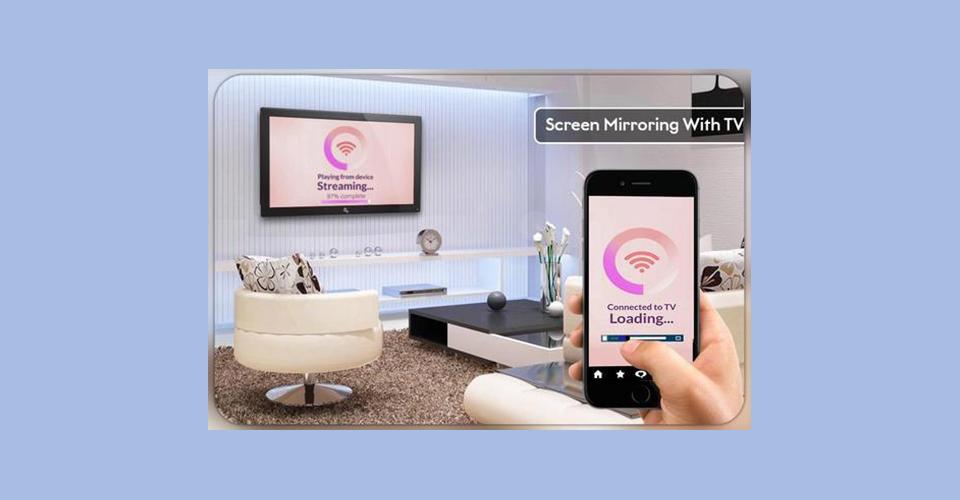 TV apps are developed entirely from scratch because other devices, particularly smartphones, have a different architecture. The design is also drawn on a clean layout – you can’t take a mobile screen and stretch it across the TV’s width.

Another nuance is different user behavior. On smartphones, everyone is used to flipping, tapping, swiping. And Smart TV apps are more like sites of the times of WAP – the early mobile Internet. Their navigation is implemented in a down-right-backward manner. Therefore, it is best to assign a separate team for TV app development to focus on this particular area of work.

Further, I propose to consider the unique features of TV app development and design. You should take them into account when building apps for a large screen.

At first glance, it might seem that it is easier to design for TV’s big screen than for a laptop, tablet, or phone. However, there are almost no benefits in this matter. Usually, TVs have the same resolutions as computers – just with a larger pixel. Don’t expect a large screen to accommodate a lot of items and information. Remember, the user may watch TV from three meters, so the content should be readable without the need to come closer.

Another factor to consider is the angular resolution. Take care of the right arrangement of design elements so that the user could see it at any angle.

TV users interact with the device in a unique way. The main instrument is a remote control, so it is vital to make an easy way to use it. Make sure the button names correspond to the app features. At this stage, do not forget to consider the particular aspects of different manufacturers. Remember about voice and touch inputs as well as regional-specific features. For example, Apple’s Siri remote is only available in certain countries. You can find a complete list on Apple’s official site. For other countries, it offers a remote with onscreen search capabilities. 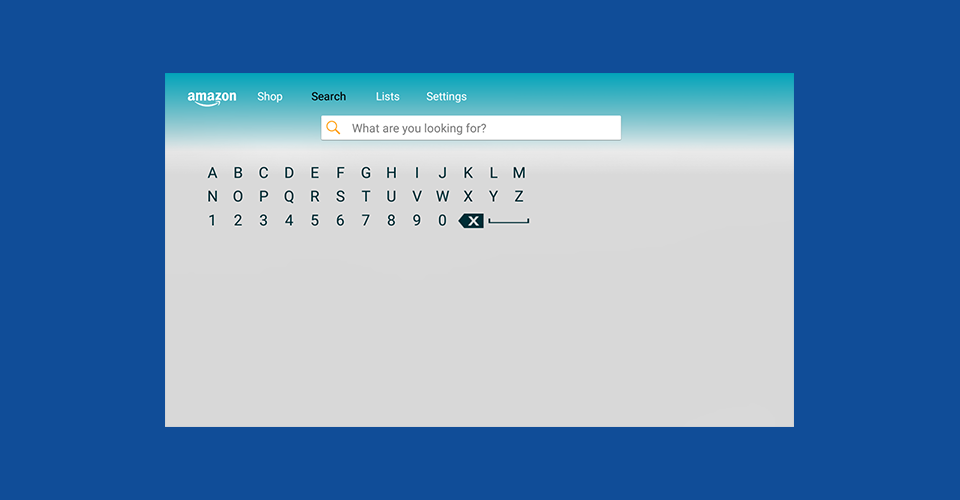 It is a good practice to make navigation intuitive, simple, and obvious. For TV apps, this is especially relevant. When the user clicks Ok, they must be sure which page they will be on. Remember, TV UX is different from other devices, so it’s crucial to find an appropriate solution. If you already have a mobile or desktop app, there is a tiny chance to copy its navigation. You will probably have to reorder or delete some elements to make the user feel comfortable moving around the TV app.

While at the PC or on mobile, the user can hover the mouse over or tap the necessary element. In smart TV, things are more complicated. The user should press a few buttons to reach the required app part. So, it is essential to highlight the elements in focus and provide the user with a clear understanding of where they are. To implement it, follow simple recommendations: 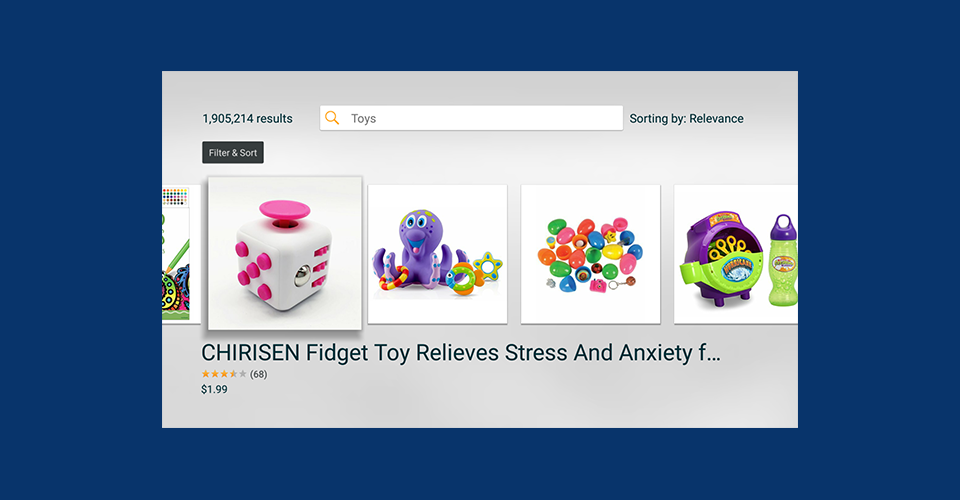 An item in focus in a eCommerce TV app

Testing is an integral part of software development. In the case of a smart TV, we recommend running it on real devices. Simulators are not very suitable since you need to make sure that remote control works correctly, and the app responds to all the user actions. Double-check all use cases and eliminate gaps before launching into production. Thorough testing will help you deliver a quality product and get happy customers.

Development for TV is a non-trivial task that requires special skills and design decisions. It is necessary to consider screen sizes, remote control interactions, specific navigation, and more. What adds to the complexity is the limited number of best practices from which to get inspiration. That is why it is crucial to choose a highly professional team that will shape your idea into a working app and contribute to your business’s success. At Softensy, we work with various technologies, including web, mobile, and TV. If you need a consultation, get in touch. We will estimate your project for free.

Softensy Team: Who We Are and What We Do

Why You Need Discovery Phase In Software Development Project