Is Go The Best Programming Language For Finance? Best Practices And Softensy Expertise

If you are going to extend your business to the digital community, you need to choose the right tech stack to develop a web or mobile solution. In the ever-changing world, technologies follow quickly one after another. A few years ago, Java occupied a leading position both in the back and front-end development. Now, new players have appeared on the horizon. One of them is Golang or Go. It is Google’s creature that aims to unite the best features of other languages. At Softensy, we often use it for high-load systems in fintech projects. If you want to know the pros and cons of Go and see what solutions it works best for, continue reading this post.

Multiple tools. Go is an open-source language with a wide range of tools for developers. You can find them in the Github repository with the step-by-step description.

Time-consuming. While, on the one hand, Go’s compiled side is an advantage, on the other – it adds some limitations as the language is less descriptive. So, you need to write more code to implement a certain function in the software.

No GUI library. If you need to implement a one-page app, the basic UI elements of the Google Go language may be enough. However, the developers will have to look for custom ways to connect the library for complex apps.

Lack of generic functions. Generic functions have the same title but undefined input data type during compilation. The absence of such functions means the developers have to create many function elements to work with various parameters. 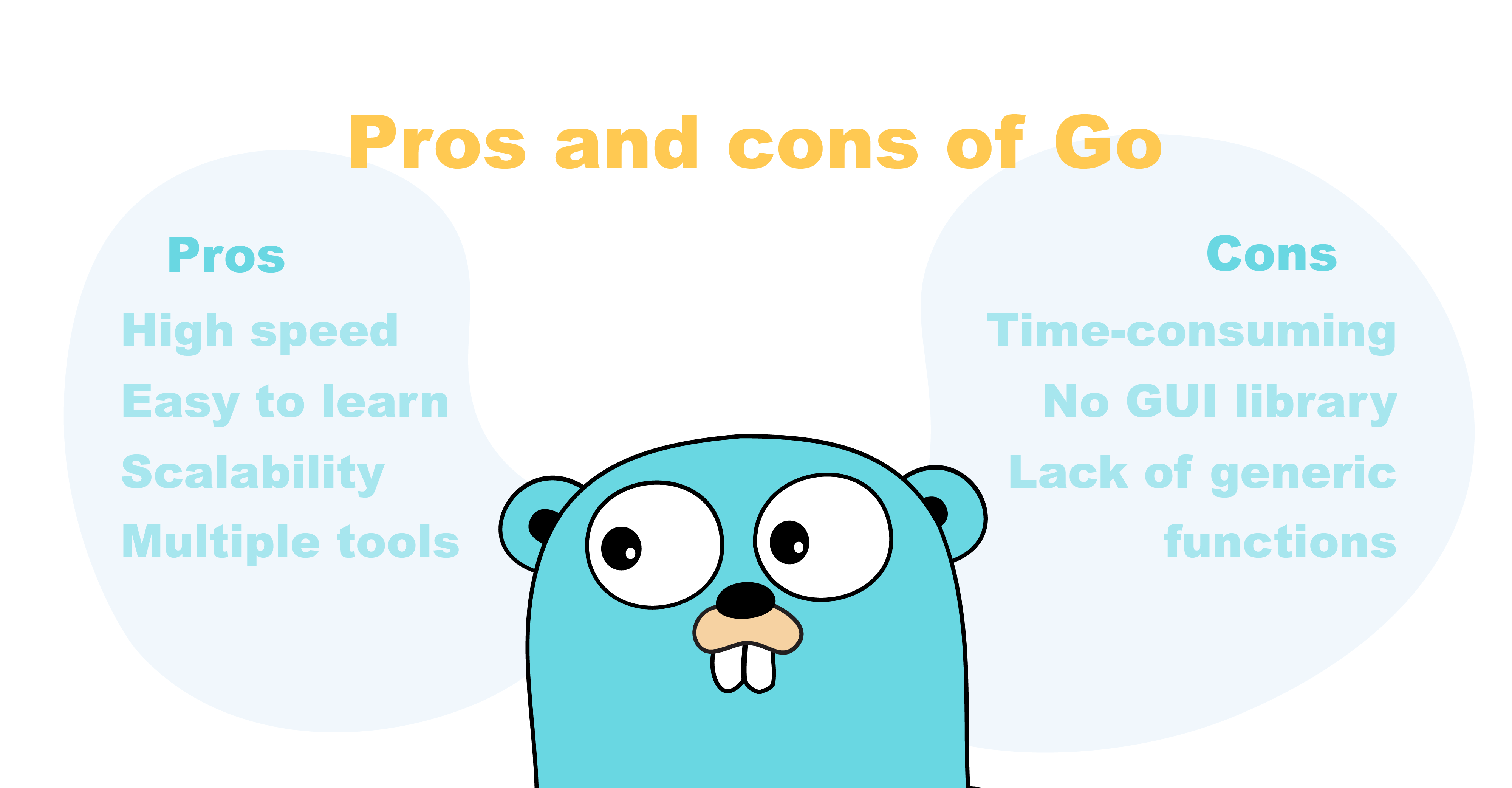 Comparison With Other Languages

If we speak about the purpose, Python is mostly associated with web development and Linux-based apps, while Go is considered a system language. System languages ​​serve to create the operating systems themselves, rather than programs running on these systems.

Go is compact and easy. C++ is quick and complex. Both languages are statically typed and of general purpose. C++ is far below Go in terms of compile time. The latter directly affects the coding speed since the code needs to be compiled every time you make any changes.

Why Go Is Good For Fintech

Golang was originally invented for tasks with a heavy load. It fully met the expectations in use, so developers often choose the language for services that work with multiple tasks. Fintech apps deal with financial data and many customers who want to stay in touch 24/7. Given this, it is essential to establish a smooth connection with users and avoid system crashes. That is why fintech developers often decide on Go. Depending on the project’s nature, they may use it entirely or for specific app parts. Let’s see a few Golang use cases. 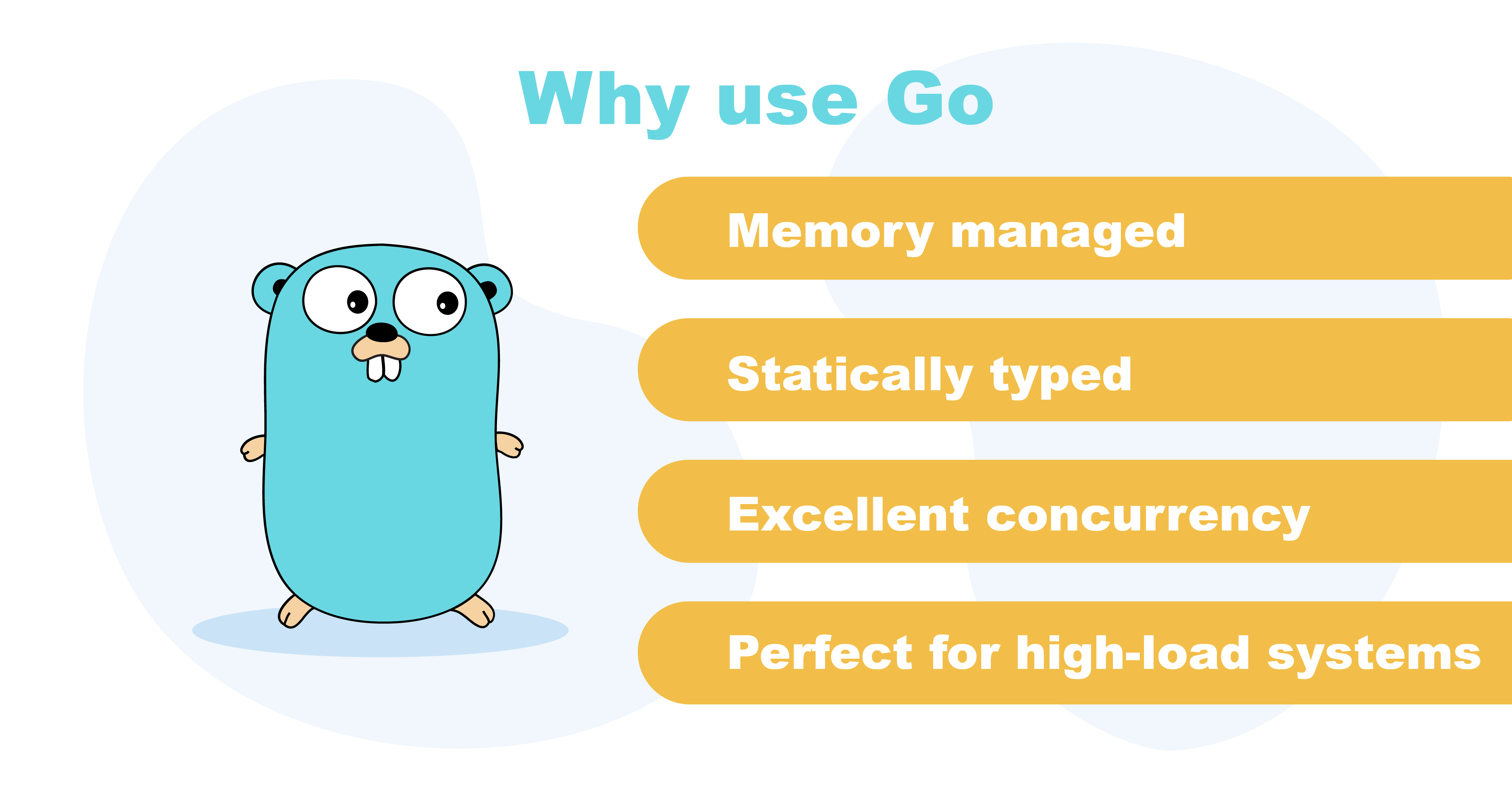 MercadoLibre is a popular e-commerce site in Latin America that works in more than 18 countries. In 2015, they decided to change their API platform to make it more scalable. The main problem was that the build and deploy time was quite slow. That is why the developers decided to refuse Groovy и Grails, which were initially chosen for development and move to Go. As a result, the developers got a more scalable and fast system that processes at least 20 million requests a minute.

Monzo is a big online bank located in the UK. It was one of the first banks that chose to refuse from the brick-and-mortar system. Go is the dominant language in which banking microservices are written. In Polyglot services, Go plays a crucial role in building concurrent servers with low latency. Nevertheless, Monzo developers use a wide range of extra tools to create an efficient online banking system.

Our Expertise In Financial Programming With Go

When You Should Move Your Project To Go