In the previous post, we learned the nature of smart contracts and talked about different use cases in the market. In this article, we will touch on technical aspects and review the most trending smart contract platforms. At the end of the reading, you will have a clear understanding of which platform is right for your business.

How To Choose Blockchain Platform

To decide on a smart contract platform, you need to understand the criteria to make a choice. The most critical factors to consider are:

Below, I have provided a detailed explanation for each of them.

To date, there are three types of blockchains: public, private, hybrid.

The mode of action depends on how privacy or openness outweighs.

Since blockchain is a decentralized system, it does not have a single authority that coordinates the workflow. You can think of governance as a set of rules that all the participants agree to follow.

There are two types of blockchain governance: off-chain and on-chain.

Off-chain governance has some elements of centralization, as some participants are superior to others in making decisions. For example, in Bitcoin and Ethereum, nodes with more powerful equipment hold the cards.

On-chain governance is like a democratic society. A majority vote takes a decision, regardless of the equipment power or the volume of deposit.

The main challenges are as follows:

The consensus algorithm is the mechanism by which the blockchain builds a consensus on transaction processing. It distributes roles among all the nodes in a network. To date, there are up to a dozen such algorithms. However, most systems use one of the four below.

In POW, many nodes with heavy-duty equipment process the data. You can think of data processing as doing complex puzzles.  Whoever uncracks it first gets the right to add a block to the blockchain. Besides, the winning node receives a cryptocurrency award.

In the POS algorithm, the power of the node equipment does not matter. All participants in the chain take part in doing a puzzle. However, each member contributes a portion of coins beforehand. Winnings go to the nodes in proportion to the amount deposited. The higher your stake is, the more transaction fee you get.

In the POS vs. POW battle, the first one wins because it gives all participants a chance in the chain. Nevertheless, each of these consensus protocols has cons. POW is energy-consuming and leaves no opportunity for the nodes with the less powerful equipment. In POS, wealthy participants control consensus, thus, violate the idea of decentralization.

pBFT algorithm allows reaching consensus, even if some nodes in the network do not respond or give incorrect information. When the validator receives a message, it performs the calculation and then asks the other nodes whether the transaction is valid. After validation, the first validator broadcasts the decision to everyone else on the network. Thus, they reach a consensus by a majority vote.

The blockchain members support a particular node by voting. The selected group then uses the Byzantine fault tolerance mechanism to reach consensus and create more blocks.

Probably, it is the most secure consensus algorithm blockchain has. It specifies that the participants will inevitably obtain consensus if attackers control less than one-third of the vote. Messages from honest nodes pass sooner or later.

Like any system, BFT has some drawbacks. The main problem now is a limited number of validators. 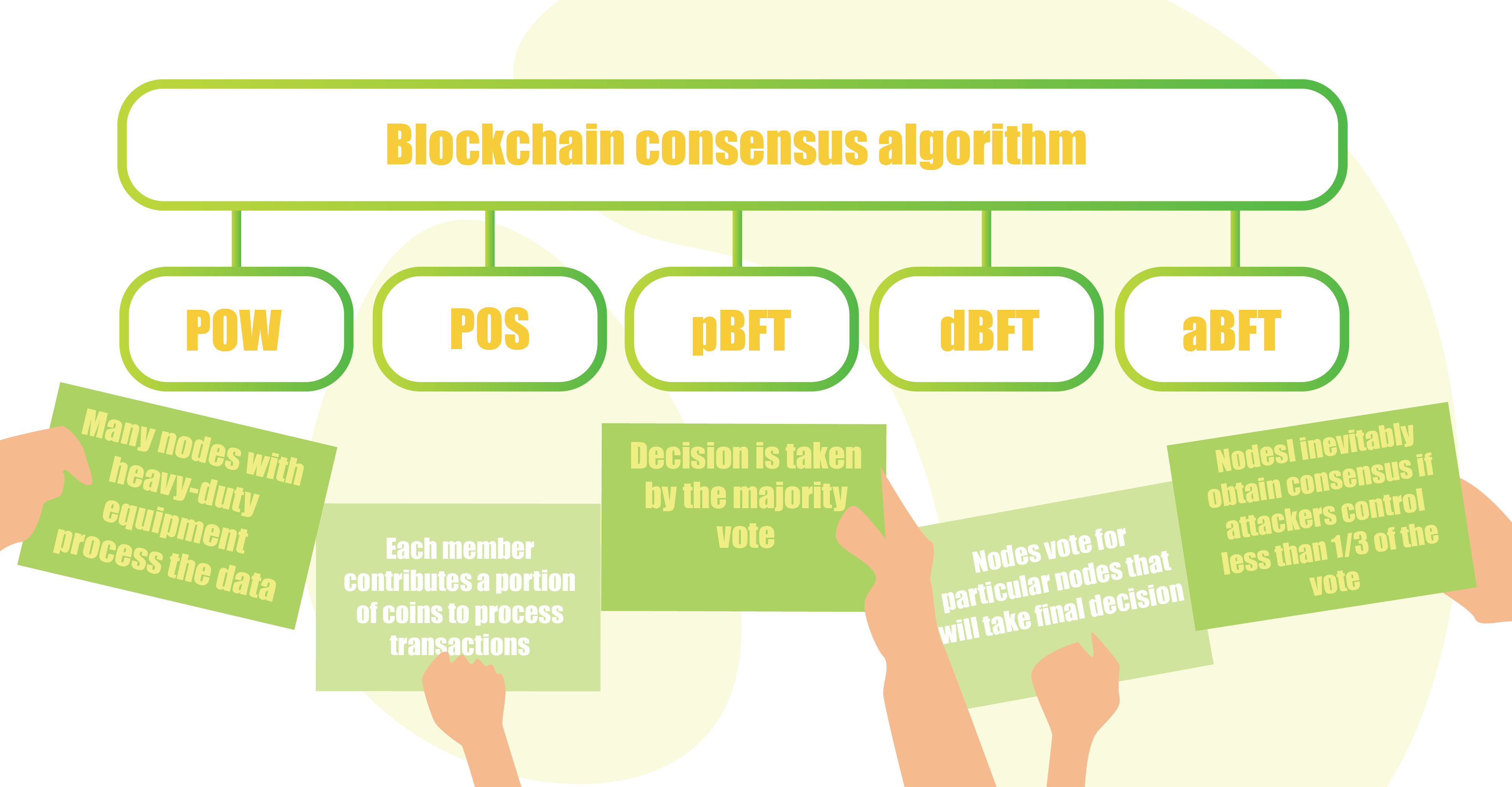 Development features depend on programming language and special tools for developers. Currently, the most popular languages for building smart contracts are

You should pay attention to the development community, documentation base, and technical support except for programming language. The more developed the ecosystem is, the easier and faster it will be to complete the task.

Now let’s review the most trending platforms for developing smart contracts and see what may serve you the best way.

At the root of the creation of Ethereum is a Canadian programmer of Russian origin Vitalik Buterin. Being interested in Bitcoin, he realized that blockchain has a lot more potential than just a base for cryptocurrency. Buterin suggested that blockchain could serve to create apps. He described Ethereum as a global computer with data stored in many places simultaneously. Such a computer can lease its power to developers to build their distributed apps.

Currently, Ethereum is the most common contract building platform. It has a strong development community and well-organized standards. If you choose to build an Ethereum smart contract, you will get a step-by-step guide for the implementation.

The main disadvantage of Ethereum is a relatively low speed. If you compare, for example, Ethereum vs. Cardano, you will see that the first one processes 15-20 transactions per second, while the latter – 50-250.

Hyperledger Fabric is a blockchain project initially launched by Digital Assets and IBM. The main feature of the Hyperledger Fabric platform is its focus on corporate applications. Therefore, the developers considered three main factors when working on the platform:

To achieve the goals, the developers separated transaction verification services from new blocks in the distributed registry. Also, Hyperledger implemented a certification authority and authorization of participants.

The main drawbacks of Hyperledger smart contracts are complicated architecture and minimum SDKs and APIs.

NEO is a blockchain platform developed by a community of Chinese programmers. Initially, NEO was created as an alternative to Ethereum, but with growing competition in this area, NEO developers began implementing their own solutions.

A big plus is that NEO supports popular programming languages, such as Java, F #, C #, Kotlin, Go, and Python. NEO uses the NeoVM virtual machine (NEO Virtual Machine) with a throughput of about 1000 transactions per second to execute smart contracts.

The disadvantage of the NEO blockchain is that it is not very popular among non-Chinese users.

EOS was launched in mid-2018. The platform has a strong team and an excellent technical base. A big plus is that the EOS uses WASM, which allows programming in the language of your choice.

The founders created EOS with a focus on large corporations. Given this, EOS claims it does not charge transaction fees and processes up to 4000 transactions per second. If you compare a relatively fast NEO vs. EOS, you will see that the former loses to the latter more than four times.

However, the main downside of the EOS smart contract is the lack of decentralization. There are only 21 manufacturers of EOS blocks, which already indicates the vulnerability of the system.

Cardano is a distributed computing platform that was introduced in 2015. The head of the company is Charles Hoskinson, who participated in the launch of Ethereum. Just as Ethereum is known as the blockchain of the second generation, Cardano identifies itself as the third one. Hoskinson believes that he can produce a long sight better mechanism. That is why Cardano uses the name “Ethereum Killer” at times.

Cardano’s goal is to catch a seamless point to serve the needs of users and regulators. For that, a vast scientific community takes part in the development. Although the project is still in its infancy, the long-term goal is to enable it to implement instant, low price, and scalable transactions around the world.

NEM, or the New Economy Movement, was launched in 2015. Today, this is the choice of many programmers since it is written in Java. Thanks to this, developers do not need to learn new smart contract programming languages, such as the specific Solidity for development on Ethereum.

The target clients of NEM technology are enterprises. NEM provides secure, fast transfers of several thousand transactions per second to meet the clients’ needs. For example, take NEM vs. Ethereum speed, and you will see that the latter is much slower. Besides, the NEM public blockchain uses a Proof of Importance consensus mechanism to optimize the network’s throughput and stability.

Ripple focuses exclusively on working with financial institutions. It provides a high transaction speed and low transaction fees. The HowMuch.net study shows that Ripple is ahead of the curve in terms of transaction speed among blockchains. Compare at least Cardano vs. Ripple or Nem vs. Ripple; you will see that the latter is an overwhelming favorite with 1500 transactions per second.

Currently, Ripple is in partnership with five large global companies testing this technology in real conditions on small projects. The most famous of these partners are American Express and Banco Santander. American Express users transfer money without a card via AmEx’s FX’s payment system using the Ripple blockchain. As a result, operations that took several days earlier are completed almost instantly and cost less than a cent.

Stellar appeared in 2014. Primarily, it focuses on foreign exchange transactions. The distributed consensus allows you to conduct an operation in 4-5 seconds. To date, Stellar is actively collaborating with IBM and Deloitte. In 2019, it started working with Mastercard.

Stellar affords handy tools to manage microtransactions. The network has a low commission and increased compatibility with the financial market. Nevertheless, Stellar smart contracts have limitations. If you want to implement complex functionality, Stellar is not the best choice. At the same time, the platform supports multi-signatures and the atomicity of transactions.

People often google Cardano vs. Stellar difference, as both platforms have much in common. To cut a long story short, you should choose Cardano for smart contract development but opt for Stellar for micro remittance.

Now let’s systematize the information above and compare the described platforms by specific indicators.

So, What Smart Contract Platform To Choose?

As always, the answer depends on your needs.

If you own a big company, pay attention to enterprise-focused platforms, such as Hyperledger Fabric, EOS, NEM, and Ripple.

If you want a fast and smooth development, look at Ethereum. Today, it has the best development base across all the blockchain platforms worldwide.

If you plan to spread business in China, Neo is the best choice. It has a vast community in that region.

If you need super-fast transaction processing, EOS and Stellar will serve you best.

If you are interested in the scientific-based platform, opt for Cardano. If you are not sure, what smart contract engine is right for you, don’t hesitate to consult with our experts. We will help choose the proper option considering the unique aspects of your business.